Kenya’s Gladys Chesire clocked a world leading 10 k time of 30:41 at the ASICS Grand 10 Berlin, becoming the ninth fastest woman ever at this distance. She was followed by fellow-Kenyan Alice Nawonuna and Ethiopia’s Sutume Asefa Kebede, who ran world class times of 31:02 and 31:11 respectively. In the men’s race 19 year-old Joshua Cheptegei broke the Ugandan record with 27:50 despite windy conditions. Kenya’s Philemon Cheboi and Ethiopia’s Abayneh Degu Tsehay were second and third, both given the same time of 28:05. Germany’a Arne Gabius was only a further two seconds back in fourth place with a personal best of 28:07. A record number of 7,844 runners entered Germany’s fastest 10 k road race. 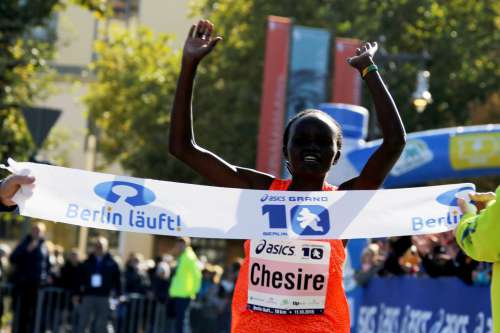 It has almost become a pattern in this race that the woman’s winner outstages the men’s champion regarding the quality of the winning times. Kenya’s Joyce Chepkirui won the race in 2013 and 2014 with superb times of 30:37 and 31:02. In her absence it was Gladys Chesire who shone today. The 21 year-old, who won a silver medal in the African Games’ 10,000 m final this summer, was running very fast from the beginning. The tiny Kenyan was much better sheltered from the winds than other elite runners because she was in the middle of a men’s group. During the first three kilometres Satume Asefa Kebede was right behind Chesire. However the Ethiopian then lost contact. Chesire passed the 5 k mark in 15:30 and continued to run hard. With some backwind stretches during the second half the Kenyan added a 15:11 and at the end was just four seconds away from Chepkirui’s course record of 30:37. Chesire improved the world leading time of fellow-Kenyan Peris Chepchirchir, who ran 30:55 in Prague, by 14 seconds.

“I am very happy with my time. Without the wind I probably could have run a little bit faster,” said Gladys Chesire, who now concentrates on the New Delhi Half Marathon at the end of November. “If possible I would then like to run the World Half Marathon Championships next spring.” 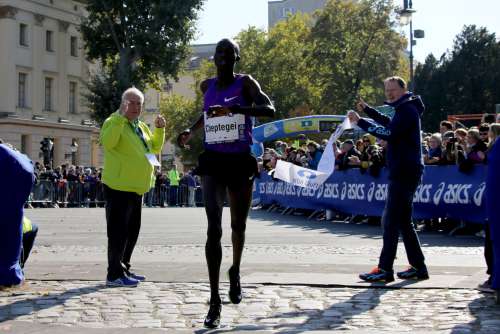 A group of six runners including a pacemaker formed the leading group during the first half of the men’s race. They passed 5 k in 14:21 and then entered a course section that takes the runner’s through the Berlin Zoo. It was there where the pacemaker dropped back and the race became significantly faster. While the group stretched Joshua Cheptegei pushed the pace. Shortly after the 7 k mark the 19 year-old reigning World 10,000 m Junior Champion from Uganda was in a clear lead. On the fast Berlin roads Cheptegei improved his personal best of 28:24 by more than half a minute and broke Moses Kipsiro’s national record by two seconds. He covered the second half in 13:29 to win from Philemon Cheboi and Abayneh Degu Tsehay.

Germany’s Arne Gabius showed another fine race at the ASICS Grand 10 Berlin, where he clocked a PB of 28:08 a year ago. This time he ran 28:07 and was fourth again, just edging out Kenya’s John Langat by one second. “I am ready for the Frankfurt Marathon,” said Arne Gabius, who hopes to break the 27 year-old German record of Jörg Peter in two weeks time. This stands at 2:08:47.

The much anticipated road racing debut of steeplechase world-class runner Paul Koech ended in sixth place with a time of 28:25. The Kenyan chose a more careful approach and ran in the second group.