Kenya’s world-class steeplechaser Paul Koech turns to the road, when he will run the ASICS Grand 10 Berlin this Sunday. There is a group of strong African runners among his rivals in this race, which is Germany’s fastest 10 k road event. Arne Gabius of Germany hopes to improve his personal best of 28:08, which he ran here a year ago. Kenyans Gladys Chesire and Alice Nawowuna as well as Sutume Asefa Kebede of Ethiopia are the women’s favourites. Organisers have registered more than 7,000 runners for the race, which leads through the western city centre of Berlin and boosts a fast course. 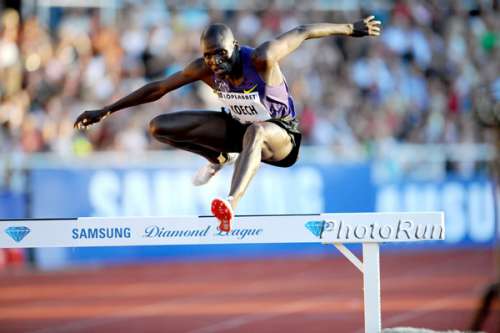 An attack on the very quick course record, which Kenya’s world record holder Leonard Komon established five years ago with 27:12, is not expected. But the race should again produce fast times below 28 minutes. A group of ten African runners will compete on Sunday.

While Kenya’s Reuben Maiyo, who was second in Berlin a year ago with 28:04, is among the more experienced road runners there are two youngsters to be watched. John Langat is an 18 year-old Kenyan who improved his PB at 10 k to 27:58 earlier this year, when he won the Dutch race in Appingedam. Joshua Cheptegei is just one year older. The runner from Uganda is he current World Junior Champion at 10,000 m. At the Beijing World Championships in August this year he finished ninth at this distance.

However the star name in this field is Paul Koech, who will be running his first international road race at the ASICS Grand 10 Berlin on Sunday. For 15 years the Kenyan has shown enormous consistency at 3,000 m Steeplecahse, clocking world-class times every year. At the age of 33 the bronze medallist from the Olympic Games in 2004 and multiple winner of the World Athletics Final now tests himself on the road.

Preparing for the Frankfurt Marathon two weeks later Arne Gabius will run his final test race at the ASICS Grand 10 Berlin. A year ago the German finished fourth in this race with a personal best of 28:08 that still stands. “I will try to run with the Africans as long as possible. My shape is better than a year ago,” said Arne Gabius, who might be able to run a time of sub 28 minutes.

Three women will most likely be in contention for victory on Sunday. While Gladys Chesire has a PB of 32:12 she ran much faster on the track this summer. At the African Games the Kenyan took the silver medal with a 10,000 m time of 31:36.87. Fellow-Kenyan Alice Nawowuna clocked her personal best of 31:46 in Nairobi despite running in altitude. But the one to beat might be Ethiopia’s Sutume Asefa Kebede. Her personal record at 10 k stands at 31:49. However she showed that she can run much faster, when she took the BIG 25 Berlin in May this year. Clocking an Ethiopian 25 k record of 1:21:55 she had passed the 10 k mark in a very quick 31:05. If Sutume Asefa Kebede is in similar form on Sunday it could be another very fast race. However it is unlikely that the course record of 30:37 could fall on Sunday. Kenya’s Joyce Chepkirui clocked this time in 2013.