Great Britain's Mo Farah won the Great North Run for the second year in a row in a sprint finish ahead of Kenya's Stanley Biwott on Sunday, September 13. 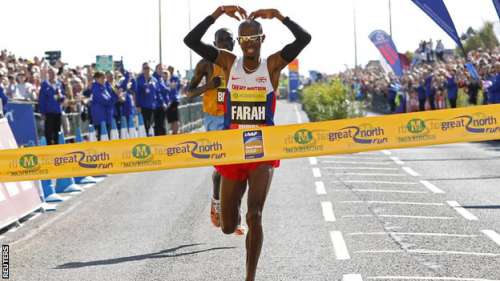 The 2014 London Marathon runner up Stanley Biwott led most of the race. However, Mo Farah produced a sprint finish over the last 400m to cross the line first  ahead of the  Kenyan with a time of  59.22.

"If it wasn't for the crowd edging me towards the end, it definitely would have been a different result. I want to come back and see if I can do a hat-trick." The 32 year old Farah told BBC after the race.

Farah recorded the fastest time by European, however his time from of 59:32 from Lisbon earlier this year remains the European record because of the extent of the downhill gradient over the Great North Run course. He also became the first back-to-back winner of the Morrisons Great North Run since 1992.

There was a last year's 1-2 repeat in the women's 1/2 marathon race as Kenya's Mary Keitany retained the women's Great North Run title in 67:32 with British Gemma Steel finishing second in 71:00.

Full results link will be available later to day here on this page.