World's one of the top female sprinters Blessing Okakbare of Nigeria has been banned by the National Sports Commission (NSC), from the Rio 2016 Olympic Games. 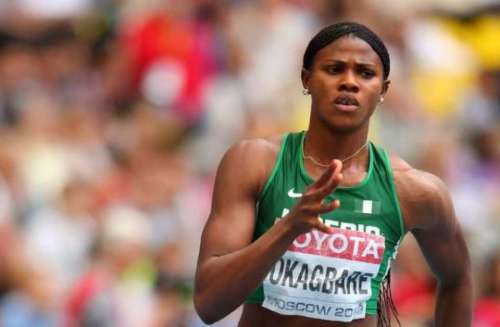 The NSC banned Okakbare after she refused to run the 200m at IAAF world championships in Beijing as well as she pulled out from Team Nigeria to the ongoing All Africa Games in Congo.

NCS officials were shocked after they saw Okabare competing in the last week's IAAF Diamond League meet in Zurich.

“I was shocked when I saw Okagbare competing in the Diamond League in Zurich last Thursday,” NCS offical Yakmut said. “I was wondering if it was the same Okagbare who refused to compete for Nigeria in the 200m event at the IAAF World Championship in Beijing, China. She even opted out of Team Nigeria for the All Africa Games in Congo. Why?"

“I have said it times without number that any athlete who feels too big to compete for Nigeria in the All Africa Games should not bother about the Rio 2016 Olympic Games. No athlete is bigger than Nigeria. I played volleyball for this country, so there is nothing an athlete will tell me about sports." he said.

At the IAAF World Championships in Beijing Okakbare finished 8th in the 100m final and few day later she failed to show up for the women's 200m final.

Last Thursday the African and Commonwealth 100m and 200m champion, Okabare, competed in the  Zurich Diamond League 100m and finished second in 10.98 behind Jamaica’s Fraser-Pryce, who ran 10.93.