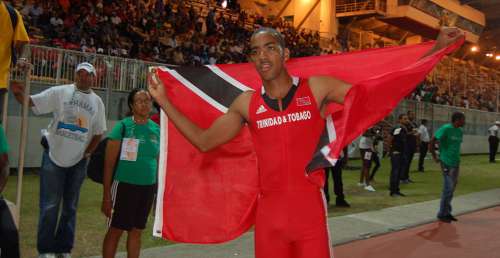 Also in the race was Olympic silver medalist Luguelin Santos who finished in a disappointing 5th place with a time of 46.19.

Have to note that many results at Saturday's Ponce Grand Prix  were affected by rainy and windy conditions.

A new world leading mark of 1:59.31 was set in the women's 800m by Rose Mary Almanza.  Alamanza in the last 100m was able to hold of compatriot Sahily Diago, who took second with the second fastest time 1:59.91 this year in the world. The third place took Jamaica's Simoya Campbell with a time of 2:01.59.

American Charles Jock with a late charge in the men's 800m managed to edge on the line Colombia's Rafith Rodriguez.  Jock posted 1:45.40, while Rodriguez clocked 1:45.53.  Andy Gonzalez of Cuba took third place witha time of 1:46.28.World silver medalist, Nick Symmonds of the US, who is coming back after taking break for one year came in 5th place with a time of 1:46.37.

Jessica Young of the US took the victory in the women's 100m witha time of 11.38, while men's 100m race was won by Trinidad and Tobago sprinter Keston Bledman who clocked 10.18 seconds.