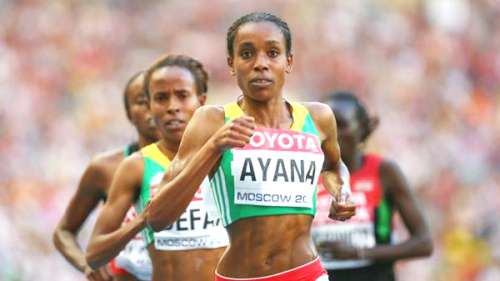 The 2013 world 5000m bronze medalist Ayana took the win in an impressive time of 14:14.32 beating second place finisher Viola Jelagat Kibiwot by 26 seconds. Almaz Ayana's time is #3 all time in the history of women's 5000m an Asian all-comers’ record and an IAAF Diamond League record. Only  Tirunesh Dibaba, the current world record holder 14.11.15 and Meseret Defar 14.12.88 have run the women's 5000m faster than Ayana.

“It was very tough, but I am very happy with the win,” James said after his win.

In the women's 400 hurdles Jamaican Commonwealth Games champion Kaliese Spencer set a world-leading time of 54.71 for victory on her way to beating Americans Tiffany Williams, 55.27 and Cassandra Tate, 55.68.

David Oliver edged out Orlando Ortega to win the Shanghai 110m hurdles in 13.17.

In the men's discus Poland's Piotr Malachowski took the win with a throw of 64.65.

The men’s high jump competition also produced a world-lead this season, as Mutaz Essa Barshim of Qatar cleared a meeting record of 2.38m on his first attempt and stopped competing.

“I stopped (jumping) in the competition because it is too early in the season to jump higher,” Barshim said after the meet.