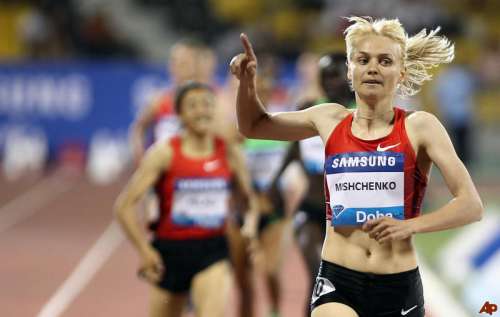 Ukraine's and Europe's on of the top middle distance runner, Anna Mishchenko, impressed with a win over 1500m in Kawasaki on Sunday.  Mishchenko in her first competition after a long set back from injury won the event in a world leading  4:02.47. Mishchenko in the home stretch out sprinted  Ethiopia's  Gudaf Tsegay.  Tsegay posted 4:03.09 for second, while  Aisha Praught of the United States was third with a new PB of 4:05.52.

Another  world leading mark was set by Ukraine's Bogdan Bondarenko who in his season opener managed to jump 2.37m.

In the men's 3000m Steeple Kenyan's went 1-2-3 with  Bernard Mbugua Nganga wining the race with the fastest time in the world this year.

In another meeting in  Klatovy Czech Republic  on Wednesday a new World lead  of 85.50m in the javelin was set by  Czech thrower Petr Frydrych.

Germany's Discus thrower, Christoph Harting, (not Robert Harting) at the 20th Wiesbadener Werfercup started the season with a massive throw of  67.53m PB and WL.