South Africa's world championships medalist in 400m hurdles star LJ Van Zyl took the win at the 200m street hudrle race by equalling the world record on Saturday at the Great City Games in Manchester on Saturday May 9. 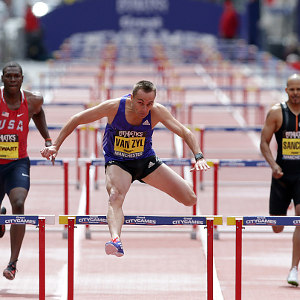 In her comback Olympic heptathlon champion Jessican Ennis-Hill fisnished in third place in 100m hurdles with a time of 13.14 seconds. Tiffany Porter took the win in the race with fast 12.86 seconds, while Lucy Hattinon was second in  13.06.  Video