Kenyan winners of marathons in Paris and Fukuoka will clash at the HAJ Marathon Hannover on 19th April. Organisers of the event, which is an IAAF Silver Label Road Race, have announced major contenders for Germany’s rising spring marathon. Benjamin Kiptoo won the Paris Marathon in 2011 and Josphat Ndambiri took the prestigious race in Fukuoka in 2011. Kenyans will be favourites in the men’s race while the women’s defending champion Souad Ait Salem of Algeria returns. The HAJ Marathon Hannover will see its 25th edition on 19th April and boosts a very flat course. 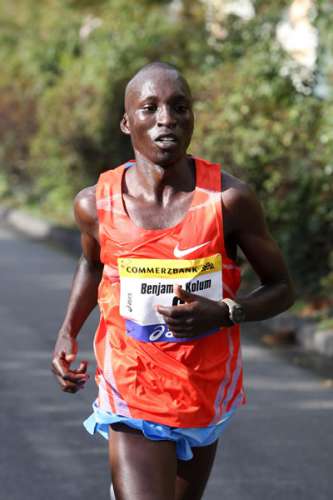 Benjamin Kiptoo is the runner who features the fastest personal best with a time of 2:06:31. With this result he took the Paris Marathon four years ago. Kiptoo won two more marathons with times inside 2:08. In 2009 he was the winner in Rome in 2:07:17 while a year later he triumphed in Chuncheon (South Korea) with 2:07:54. The 36 year-old could not match those results recently, but the fast course in Hannover will provide a fine opportunity for good times.

Josphat Ndambiri has only run one marathon so far and that was a couple of years ago. But he enjoyed a perfect debut when he took the Fukuoka Marathon in 2011 with 2:07:36. After a longer period with injuries he now hopes to come back strong in Hannover. The 30 year-old has achieved some very good track resuts during his career. Placing fifth in the 10,000 m final of the World Championships in 2007 he later clocked a world-class time of 26:57.36 at this distance.

However a runner who showed fine form more recently might be the one to beat: Ronald Korir entered last year’s Frankfurt Marathon as a pacemaker. After leading to the 35 k point the Kenyan continued and finished sixth with 2:07:29, making it a fine debut at the distance. Jacob Cheshari is another Kenyan on Hannover’s startlist who has already run sub 2:08. He was fourth in Frankfurt with 2:07:46 in 2013.

While Falk Cierpinski, who has a PB of 2:13:30, carries national hopes in the men’s race it is the women’s event where spectators can hope for a top finish by a German runner: Lisa Hahner, twin sister of the reigning Vienna Marathon champion Anna Hahner, returns to the HAJ Marathon Hannover. A year ago she was unfortunate when she had to drop out due to a foot injury. “This time I am fit, there are no problems so far. It is my aim to go under 2:30,” said Lisa Hahner during a press conference in Hannover. The 25 year-old, who just returned from high altitude training in Ethiopia together with her sister, has a personal best of 2:30:17 from Frankfurt 2013.

A year ago 2:33:09 was enough for Souad Ait Salem to win the race. It is very likely that she has to run quite a bit faster to successfully defend her title on 19th April. Of course Salem has proved that she can do so in the past. The 36 year-old Algerian marathon record holder has a personal best of 2:25:08. Ukraine’s Olha Kotovska, who took the Rennes Marathon last year with 2:28:47, and Ethiopia’s Shuko Genemo, who has a PB of 2:31:09, are contenders for victory as well.

More information about the HAJ Marathon Hannover is available online at: www.marathon-hannover.de