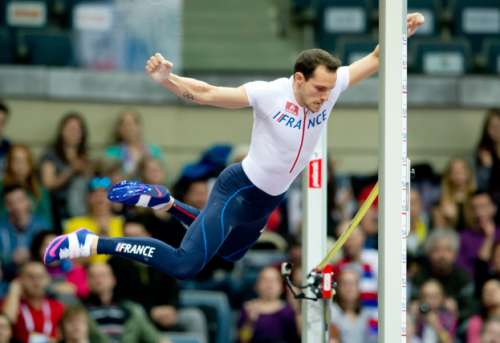 "I'm really, really happy making the championship record. It was a great day for me in Prague today," The 28-year-old Frenchman who has won  all European Indoor titles since 2009.

After clearing 6.04m Lavillenie moved the bar to a new world record height of 6.17m, but lucked the power to reach that height in all three attempts.

"I was lacking a bit of energy, and only 99 percent is not enough to do a new world record," said Lavillenie.

Pavel Maslak  in front of his home crowed stormed to a victory in the 400m. Maslak clocked 45.33 seconds, while defending champion Dylan Borlee of Belgium was second in 46.26 and Poland's Rafal Omelko third 46.26 seconds.

Portugal's Nelson Evora won the men's triple jump with a mark of 17.21m.

Hungary' Anita Marton of Hungary won the women's shot put in a national record of 19.23m.