The two defending champions have opted to return to the Vienna City Marathon, which will be staged on 12th April. Ethiopia’s Getu Feleke and Germany’s Anna Hahner produced two of the most spectacular performances in the history of Austria’s biggest sporting event in 2014. While Feleke stormed to a brilliant course record of 2:05:41 Anna Hahner came from well behind in the final few kilometres to snatch victory. “After these memorable performances by Getu and Anna we are more than happy to welcome these two athletes back to the Vienna City Marathon. We are looking forward to another great race,” said Race Director Wolfgang Konrad. Adding other running events staged parallel to the marathon on 12th April organisers expect more than 40,000 entries once again. The Vienna City Marathon is an IAAF Gold Label Road Race. 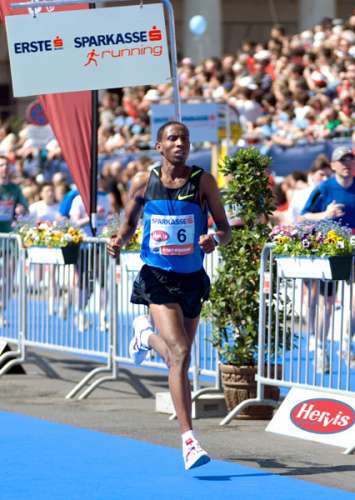 It will be already the third time that Getu Feleke competes in the Vienna City Marathon. It was here, where his marathon career began back in 2009. In a unique debutants’ only elite race the Ethiopian took seventh place with 2:11:42. With the exception of a ,did not finish’ in the London Olympics 2012 Feleke then always clocked sub 2:10 times. While he features a PB of 2:04:50 from Rotterdam 2012 the Ethiopian clocked his second fastest time in Vienna last year. Feleke, who had come back from an illness in 2014, was then unfortunate a couple of months later. Preparing for the Frankfurt Marathon in October an injury forced him to withdraw. However he showed that he has regained fine form when he was second in the Barcelona half marathon last Sunday. Clocking 60:45 he missed victory by just three seconds.

“My aim is to improve my Vienna course record,” said Getu Feleke. With around seven weeks to go before he will travel to the Austrian capital to defend his title the 28 year-old prepares in high altitude in Sululta for the Vienna City Marathon. It is by coincidence exactly the same venue near Addis Abeba where Anna Hahner currently trains as well. Together with twin sister Lisa she is in Ethiopia for the first time. The background is that Hahners are coached by Italian Renato Canova, who takes care of Kenenisa Bekele and other world-class runners in Ethiopia.

“I am really looking forward to coming back to Vienna. Last year’s victory was a major step forward for me. The atmosphere was very special,” said Anna Hahner, who celebrated her biggest career win so far, when she clocked 2:28:59 in Vienna last April. With little over two kilometres to go she had been almost one and a half minutes behind Caroline Chepkwony. However the Kenyan badly faltered due to stomach problems and Hahner passed her with a few hundred metres to go.

“When I will return to Vienna I want to produce the best possible performance. I will really give it all. We will see what’s possible regarding the placing, however it is my aim to make the podium again,” said 25 year-old Anna Hahner, who improved her personal best to 2:26:44 in last September’s Berlin Marathon.