The Sportisimo Prague Half Marathon has made a name for itself among the leading half marathons in the world in recent years thanks to a series of super fast performances. 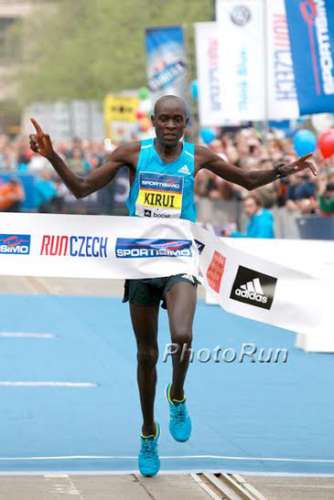 Judged on the winning times for the Run Czech event in 2014, it was the best race for the distance anywhere in the world. The organisers are naturally keen to maintain this success for the latest edition of the Sportisimo Prague Half Marathon on March 28 in the Czech capital. A top-class field has been assembled, led by a handful of world-class Kenyans. While title holder Peter Kirui will face Geoffrey Mutai and Leonard Komon, the leading contenders in the women’s race are Edna Kiplagat and Lucy Kabuu. The Sportisimo Prague Half Marathon is an IAAF Gold Label Race, the highest category of road race.
“I believe we’ve assembled a very strong field,” said Jana Moberly, who is responsible for putting together the elite field in Prague. “At present we have seven runners with personal bests under one hour on the start list and nine women who have run faster than 70 minutes. But it’s very likely that we’ll have one or two additions,” explained Moberly, who hopes for a men’s winning time “very close to 59 minutes.”

Several runners look capable of achieving such a world-class time which is not far off the Prague course record of 58:47. One of them is definitely Peter Kirui. The 27-year-old Kenyan dominated the race last year to complete a surprise win in the top-class time of 59:22. On that occasion Kirui had the handicap of being in the middle of a training course with the Kenyan Police and unable to train properly. He will be free of such duties now and it will be fascinating to see if he can improve still further.

Another who caused a surprise in the 2014 Run Czech Running League was Geoffrey Ronoh. The 32-year-old triumphed firstly in the Mattoni Olomouc Half Marathon, where he was originally entered as a pacemaker but left marathon superstars Wilson Kipsang and Dennis Kimetto in his wake. A few weeks later the Kenyan also won the Birell Prague Grand Prix over 10 km in a course record of 27:28. Geoffrey Mutai was among those beaten. Mutai will again face Ronoh in Prague, whose best for the half marathon is 59:45. Mutai, known worldwide as a top marathon runner with victories in Boston, New York and Berlin, has a best of 58:58 which makes him the fastest man in the field.

Leonard Komon’s presence adds another big name to the field. The Kenyan is the world record holder for 10 and 15 km. A year ago he ran an extraordinary debut for the half marathon in Berlin, winning in 59:11, the fastest ever by a newcomer to the distance.

Four consecutive course records are proof of the enormous development which the Sportisimo Prague Half Marathon has seen in the women’s performances in recent years. In 2014 Joyce Chepkirui brought the time down to 66:19 which was the fifth fastest ever run for the distance. Given that high standard, breaking the course record on March 28 will be no easy task. But with the presence of Lucy Kabuu, the race has a contender who has run faster than Chepkirui. Two years ago the Kenyan won the Ras Al Khaimah event in the United Arab Emirates in 66:09.

Among Kabuu’s rivals in the Czech capital will be Edna Kiplagat. The Kenyan, winner of the world marathon title in 2011 and 2013, has a personal best of 67:41. Last year Kiplagat won another of the half marathons in the Run Czech series, taking the title in Olomouc. Two more runners with best times under 68 minutes will be on the start line in Prague: Lineth Chepkurui of Kenya (67:47) and Ethiopia’s Worknesh Degefa (67:49).