Kenenisa Bekele, who won an impressive marathon debut in Paris last year was forced to drop out from today's Dubai marathon after he suffered cramps in  both hamstrings. 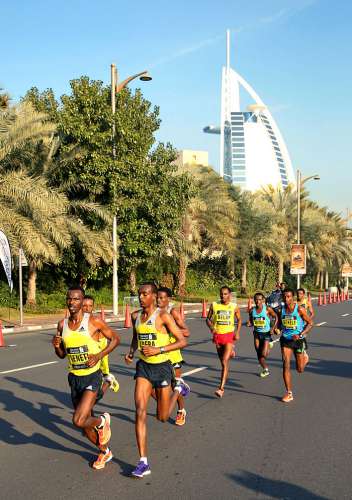 Bekele was in the lead group until the 28km marker, but then slowed down and withdrew from the race at 30km.

“Kenenisa suffered of hamstring problems in both legs,” his coach Renato Canova later explained what happened. “But I think the real problem is in his right Achilles tendon. At the end of November he had to reduce training because of this. But then it got better and actually his final training sessions looked encouraging. A world record was never a realistic target, but a 2:04 time seemed realistic. However when I saw him running today he did not look relaxed, he looked tight. And I think this is the reason why he developed hamstring problems. Something must have happened in the final few days before the race,” said the Italian coach. “We now have to solve this tendon problem. But for his future marathon career I remain very confident. I think he will do really well.”