Russia's Olympic champions in race walk Valery Borchin and Sergei Kirdyapkin are among the five Russian race walkers that were banned for doping the Russian Anti-Doping Agency (RUSADA) announced on Tuesday. 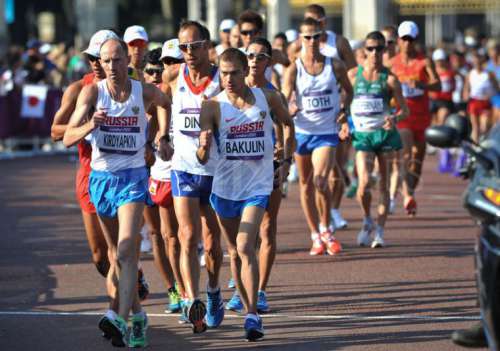 Also (RUSADA) banned  Russia's 2011 world champion Sergei Bakulin and silver medallist Vladimir Kanaykin for failing doping tests. Another athlete that was banned for doping is Olga Kaniskina the RUSADA posted on its website.

"The Russian Anti-Doping Agency RUSADA after meeting with its Disciplinary Committee has decided to ban five sportsmen for taking banned substances."

"The breaking of anti-doping rules was due to abnormal blood levels in their biological passports, which belong to the International Association of Athletics Federations." RUSADA posted on its website.

Kirdyapkin is the gold medalist at London Olympics in 2012 his ban will expire before Rio Olympics meaning he will be eligible to defend his Olympic title in case he makes the Russian team.

The length of Kirdyapkin's ban means he will be eligible to defend his title at the 2016 Rio Olympics.

Borchin, who officially retired from competition is the Beijing Olympic champion.  In 2005 he tested positive for ephedrine and was banned for one year.

Bakulin is the 2011 50km world champion while Kanaykin took silver in 20km in the same championships. Kanaykin had already served a 2 year doping ban in 2008 for using doping.