• Dubai will be next Stage in Kenenisa Bekele’s Marathon Quest

Kenenisa Bekele’s next marathon will be in Dubai. The organisers of the Standard Chartered Dubai marathon in conjunction with Dubai Holding announced the news at a press conference in the Desert Emirate on Sunday. 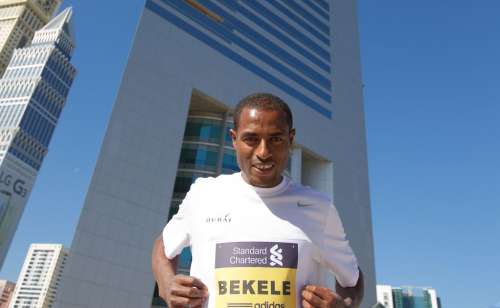 The major investment conglomerate Dubai Holding, supporter of the marathon, has engaged Bekele as its ambassador for its Corporate Wellness Programme. The marathon will be run on its super flat and fast course on January 23. Taking into account shorter distances held in conjunction, around 25,000 runners are expected to participate. Entries can be made online at: www.dubaimarathon.org

Kenenisa Bekele is without doubt one of the greatest long distance runners of all time. The 32-year-old has won three Olympic titles over 5 and 10,000m, five world championship titles on the track and still holds the world records at both distances. This year the man who has won eleven world titles in cross-country decided to move to the marathon. After a commanding debut in Paris where he ran 2:05:04 to break the course record, he also broke 2:06 in his second race at 42.195 kilometres although his time of 2:05:51 was only good enough for fourth place when Bekele himself had expected more. He wants to make amends in Dubai, where Ethiopian debutants in the marathon have produced brilliant performances to break 2:05 in each of the last three races. In 2012 Ayele Abshero set the current course record of 2:04:23.

“I’ve followed the race in recent years and know that the Dubai course is very flat which should make fast times possible. Of course, switching to the marathon is not easy but I’m delighted at the challenge offered by Dubai and hope, as Ambassador for the Dubai Holding Corporate Wellness Programme, I can motivate people of all ages to run if I produce a fast time,” said Kenenisa Bekele at a press conference for the race which offers the biggest prize in marathon running: $200,000 each for the men’s and women’s champions of the Standard Chartered Dubai Marathon.

As for his possible time, Kenenisa Bekele explained: “I’ve learned from my first two marathons and will be better prepared for Dubai than for Paris and Chicago. I hope we can attack the course record of 2:04:23. Of course, I can’t forget Haile Gebrselassie’s Ethiopian record of 2:03:59 – it would be great if I could break that. But the priority in Dubai would be to improve my personal best and set a course record if possible.“

The Event Director Peter Connerton believes that Kenenisa Bekele’s participation could have the same effect – in terms of raising the popularity of the race – as did Haile Gebrselassie’s who won the title for three consecutive years from 2008. “Just like Haile, Kenenisa has made the move to the marathon after he has won everything on the track and in cross-country,” said Connerton. “So far he has made a better start to his marathon career than did Haile and Paul Tergat. Kenenisa is determined to reach the next level in the marathon. We’re proud that he believes that Dubai is the right place for the next advance in his extraordinary career.”

Jos Hermens, Bekele’s manager, also believes that his athlete has still much more to give in the marathon: “Haile Gebrselassie and Paul Tergat also needed a few races before they ran world records,” said the Dutch agent. Hermens is optimistic that Bekele can produce a very good performance in Dubai: “I’m sure that Kenenisa will be better prepared for the Standard Chartered Dubai Marathon than for his first two marathons – he didn’t have the capacity in those races to break 2:05. He’s a runner who needs competitive pressure. In the past Kenenisa was always especially strong when he ran cross-country in the winter. He had to prepare for that, ie, he had to train with intensity during the winter. That’s also the case for the Dubai Marathon. He recovered fast and the training for Chicago will also help in his build-up for Dubai.”

Kenenisa Bekele has learned the lessons from the race in Chicago. “I saw that I had to train more and in a different way if I were to be successful in the marathon,” said the Olympic champion, who also has a new and well-known coach from Italy: “Renato Canova has taken over my training since Chicago. He is with me in Addis Ababa and the training is going well.”

More information and online entry is available at: www.dubaimarathon.org