Coming off of a long season break, Olympian Dawn Harper Nelson has her eyes on winning the IAAF Diamond League trophy  for a third time in a row. 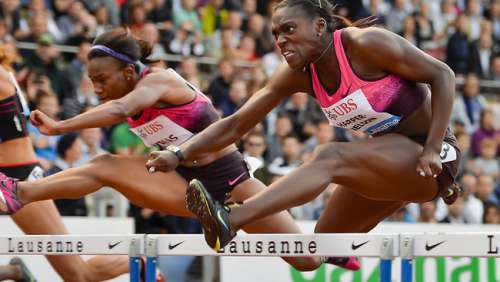 “When I started the season, I set out to challenge myself to see if I can win another IAAF Diamond League title, making it three times in a row,”  said Harper Nelson.  “My coach Bobby Kersee believes that I can do it, and here we have only four races left.”

Harper Nelson will start the quest at the DN Galan meet in Stockholm on Thursday, August 21, and continue to Sainsbury’s Birmingham Grand Prix, Birmingham, England, Weltklasse Zürich, Zurich, and AG Insurance Memorial Van Damme, Brussels, Belgium.  Her last race at the Meet Areva in Paris on July 5, with a time of 12.44 seconds, she set a new world lead time.   Currently,  she sits in second place with eight points, behind United States hurdler Queen Harrison (11 points).

Though she started the season shaky, she proved that hard work and adjustments were key in getting her to this point to set a couple of personal milestones.  Harper Nelson said, “I keep telling myself, I have to run my own race, which is what I have been setting out to do all season.  The first race of the season, I had not lined up next to anyone, and I did not run my race.   After the third race, my coach and I made adjustments like lining up during practice, working with my weight trainer, and concentrating on staying in my lane helped me put it all together.  My coach told me during this break in preparation for the last half of the season, practices would be more intense, and they were.  I am feeling ready for the competition.”

Intense practices were not the only things that were a part of the two month long track season break for the Olympic medalist.  Harper Nelson found time to give back in partnering with American Diabetes Association (ADA) to encourage everyone to participate in the Tour de Cure, a bike ride through southern California to raise money to find a cure and improve the lives of all people affected by the disease that will take place in September and lending her expertise at the Nike Elite Camp, where the top 20 high school sprinters in the United States assemble at the Nike campus to train and learn from the best track professionals in the world under the Nike umbrella.

“I am excited about partnering with ADA because of me having family members with the disease.  My mother motivated my older sister and me to exercise regularly and monitor our health - from a child.  I want to be able to help others focus on having a balanced diet and regular exercise to prevent and manage the disease.”

“At the Nike Elite Camp, I enjoyed being able to talk to the high school athletes about my experience as a professional and college athlete.  It is a really good camp that Nike does every year to help them become better sprinters, hurdlers, and all around athletes. All of them were so very talented and appreciative, as I was appreciative as well because they expressed how much they were fans of mine. Overall great experience.”

Harper Nelson is a two-time Olympic medalist, winning the gold medal at the 2008 Olympics in Beijing (12.54) and the silver medal at the 2012 Olympics in London (12.37), in the women’s 100-meter hurdles.  She just won her first non-championship year USA National title in June 2014 at the U.S.A. Track & Field Outdoor Championships and currently is ranked number one in the world.  Harper Nelson, along with Sally Pearson of Australia, are the only women to have a gold and silver medal in the 100-meter hurdles since the event was extended in 1972.