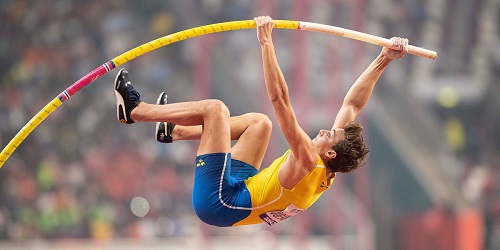 Reigning European pole vault champion and world silver medallist Armand “Mondo” Duplantis from Sweden cleared 6.00m in his first competition of the year setting a world seasonal lead, a meeting record and a national indoor at the PSD Bank meeting in Dusseldorf, the third leg of the 2020 World Athletics Indoor Tour.

Duplantis improved the world seasonal best three times at 5.90m and 5.95m in the first attempt with a big margin over the bar and 6.00m at the second time of asking. “Mondo” made three good attempts at breaking Renaud Lavillenie’s world record at 6.17m and came very close to clearing the bar in his second attempt. Duplantis equalled the sixth world indoor best performance and became the 11th vaulter in history to clear the 6.00m barrier indoors.

“Training has been going really well. I feel very fit and in very good shape. That second attempt at 6.17m was as good as I could have expected. You don’t think that everything is going to be put together in your first meet just because you are physically fit, but it came together nicely. I am excited about the rest of the season”, said Duplantis.

The Dusseldorf meeting produced five more world seasonal best performances (Selemon Barega in the men’s 3000m, Flip Ingebrigtsen in the men’s 1500m, Beatrice Chepkoech in the women’s 1500m, Filip Mihaijevic in the men’s shot put and Neele Eckhardt in the women’s triple jump). World silver medallist Selemon Barega made a winning start to his indoor season in the 3000m with a world leading time and a meeting record of 7:35.71 holding off his compatriot Getnet Wale (7:36.03) and Kenya’s Bethwell Birgen, who set his PB with 7:36.71. Birhanu Balew from Barhein finished fourth setting a new Asian record of 7:38.67.

“Having the crowd behind me really helped push me past Kszczot”, said Reuther. World indoor silver medallist Christina Clemons won the women’s 60m hurdles final in 7.91 ahead of 2017 European Indoor champion Cindy Roleder (7.94) and this year’s Karlsruhe meeting winner Tobi Amusan from Nigeria (7.96).

World Championships semifinalist Mohamed Yaqoub Al Youha produced the surprise of the evening by winning the men’s 60m hurdles final in a PB of 7.54 ahead of Greece’s Konstantinos Douvalidis (7.61) and Hungary’s Valdo Szucs (7.62).

Lisanne De Witte from the Netherlands took the win in the A 400m race setting her PB with 52.30 edging Justyna Swyety Ersetic (52.49). European 400m hurdles champion Lea Sprunger prevailed in the B heat race with 52.50.