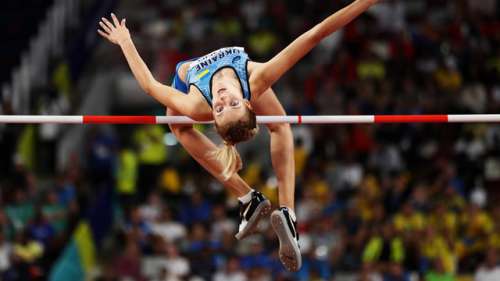 World high jump silver medallist Yaroslava Mahuchik won the women’s high jump breaking the world under 20 record for the second time this season with 2.02m in the Messe Halle at the 36th edition of the Karlsruhe Indoor meeting, the second leg of the 2020 World Athletics Indoor Tour.

The Ukrainian 18-year-old jumper needed two attempts to clear 1.93m and 1.96m before clearing 1.99m at the first time of asking. She ended her competition with three unsuccessful atttemps at 2.04m. Her compatriot Yulia Levchenko completed the Ukrainian double by clearing 1.99m at her second attempt. Germany’s Imke Onnen tied her PB with 1.96m. Salome Lang from Switzerland also improved her PB with 1.93m.

“I expected the world under 20 record because I tried 2.02m in Cottbus two days ago. I thought I could do it here. I did it on my first jump: My third attempt at 2.04m was very close, so I hope next time I will make it”, said Mahuchik.

“The goal was just to come out and execute every round and I think I did that. We have been working on the weakest part of the race – the first four hurdles”, said Amusan.

In the women’s long jump world silver medallist Maryna Bekh Romanchuk from the Ukraine made two fouls in the first two rounds but she bounced back by setting a world seasonal best and a personal best of 6.92m in the third round in her only valid attempt of the evening. She overhauled world outdoor champion Malaika Mihambo from Germany, who was leading with 6.76m in the second attempt. Mihambo improved her best mark by jumping 6.83m to finish second in her first long jump competition of the indoor season. Sweden’s Khaddi Sagnia finished third with 6.72m. Mihambo also ran the 60m heat in 7.37, but she did not qualify for the final. US Shania Collins won the 60m final in 7.20 ahead of Switzerland’s Ajla Del Ponte (7.27).

World indoor bronze medallist Bethwell Birgen clinched the win in the men’s 3000 metres setting the world seasonal best and his PB with 7:38.50.

Ayomide Folorunso from Italy won the first 400 metres heat improving her PB by 0.01 with 52.56. European 400m hurdles champion Lea Sprunger from Switzerland, winner in the second heat, was credited with the same time as Folorunso.

In an experimental men’s long jump competition only the top-three jumpers from the first five rounds earned the sixth and final attempt. Spain’s Eusebio Caceres won the men’s long jump with 7.99m in the sixth attempt beating Ukraine’s Vladyslav Mazur (7.84m). Mostafa Smaili from Morocco ran a world seasonal best of 1:46.38 in the men’s 800 metres.