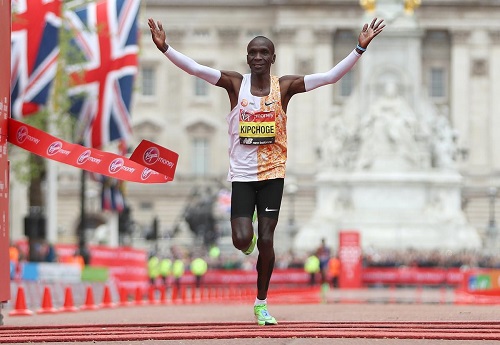 “I am delighted to be returning to the Virgin Money London Marathon in 2020,”

“I love running in London where the crowd support is always wonderful." said Kipchoge.

Kipchoge will return to racing for the first time since he broke the two-hour marathon barrier with historic 1:59:40 in October in Vienna.

"Breaking the two-hour barrier in Vienna was an incredible moment. It showed that no human is limited and that is a belief that continues to drive me on to set new objectives," he said.

The 35-year-old Kipchoge will try to become the first man to win the London Marathon five times. He broke his own London Marathon course record at this year with a fenomenal 2:02:37 performance.

“Making history in London is my next target. I am proud that I am currently the only male able-bodied athlete to have won this great race four times and that no one, male or female, has won it more than that."

Two weeks ago Kipchoge was voted the for the second time the World Athlete of the Year by the track and field governing body, World Athletics.