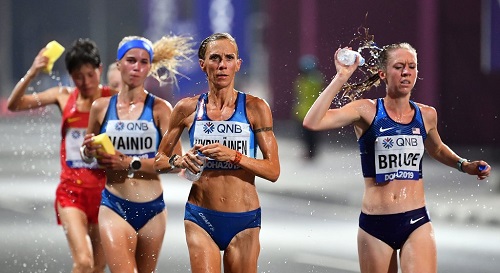 2020 Tokyo Olympics: The International Olympic Committee (IOC) announced on Wednesday it plans to move the marathon and race walk from Tokyo to the northern city of Sapporo.

Sapporo was chosen for its cooler temperatures, about 6 degrees centigrade cooler during the day than incapital city Tokyo.

"Giving athletes the best platform for their performances within the environment they are in is central to all major events, and we will work with the organizers to create the very best marathon and race walk courses for next year's Olympic Games." IAAF president Lord Coe said.

"Athletes’ health and well-being are always at the heart of our concerns," International Olympic Committee president Thomas Bach said: "A range of measures to protect the athletes have already been announced. The new far-reaching proposals to move the marathon and race walking events show how seriously we take such concerns. The Olympic Games are the platform where athletes can give ‘once-in-a-lifetime’ performances, and these measures ensure they have the conditions to give their best. I would like to thank World Athletics, and we look forward to working with them on the implementation.”

The implementation of the initiative to move the marathon and the race walks will be discussed with all the parties concerned in a special meeting from 30 October to 1 November in Tokyo.