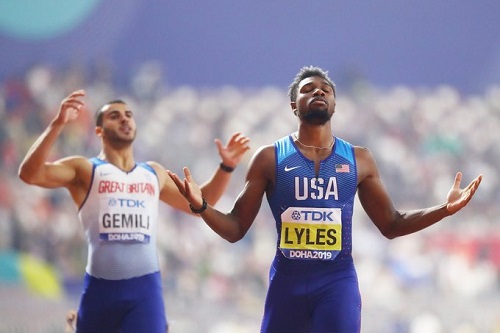 The 22-year-old American, Lyles, pulled away from the field in the last 100m to claim the World title in 19.88 seconds. American Andre de Grasse, who took bronze on Saturday in the 100m edged Ecuador's Alex Quinonez to take silver in 19.95. Quinonez finished in third in 19.98 seconds as Great Britain's Adam Gemili took fourth in 20.03 seconds. Defending World champion Ramil Guliyev of Turkey ran was 5th.

"So many times I thought in my brain I'm going to be world champion this year.

"I have it on my phone, I've been saying it since the season started, every day I've been hitting my car window on the way back from practice saying, 'I'm going to be world champion this year' as the music blasted out.

"This is my first one and I don't know a lot of people who can say they came to their first world championships and grabbed the gold." Lyles told BBC. 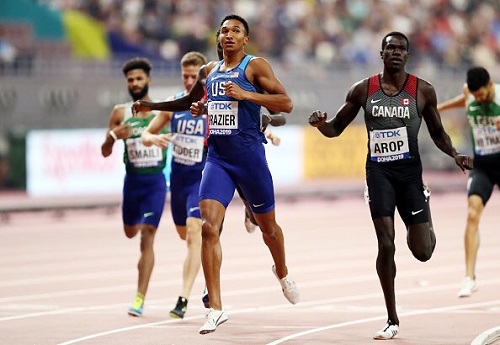 The men's 800m winner Donovan Brazier of the United States clocked a new World Championships record to win the gold. 300m from the line,  Brazier overtook the lead from Puerto Rico's Wesley Vazquez, who led the race clocking blazing 48.99 seconds for the first 400m, and powered home to claim the World title in 1:42.34. Brazier set a new Championships record, broke the 34-year-old American record of 1:42.60 by JohnnyGray, and set the 9th fastest time in history.

“I’ve said all season that my goal was to get the gold here and to break this record, and that’s what I did,” said Brazier.”It means the world to me. To be world champion at 22 years old, I can’t believe it.”