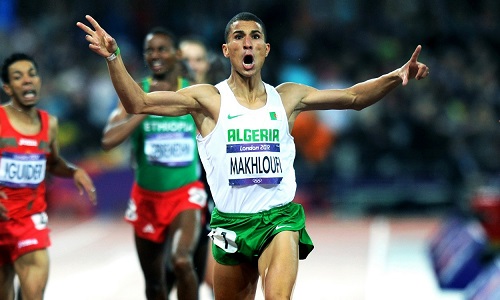 The 2012 London Olympics 1500m champion Taoufik Makhloufi will compete for the first time since 2016 at the Meeting International Sotteville-les-Rouen on Tuesday, July 16.

After winning silver medals in the 800m and 1500m at the 2016 Rio Olympics, Makhloufi hurt his calf muscle in a training and missed 2017 and 2018 seasons. Makhloufi also missed almost the entire 2013 season including the Moscow World Championships after his 2012 Olympic gold.

In Sotteville, Makhloufi will race the 800m where he will face Kenyans Alfred Kipketer, the Rio Olympics finalist (PB 1:42.87), and Nicholas Kipkoech (PB 1:43.37). Also in the men's 800m field is Puerto Rico's Ryan Sanchez who won the Oslo Diamond League in June.

Makhloufi is hoping to get back in top form and to qualify for the Doha World Championships. The deadline to make the mark is September 6.

Frenchman Christophe Lemaitre, the Rio Olympics bronze medalist, will line up in the 100m and 200m races. Meanwhile the 2013 World Championships silver medalist Murielle Ahouré of Ivory Coast will contest in the Women's 100m dash.