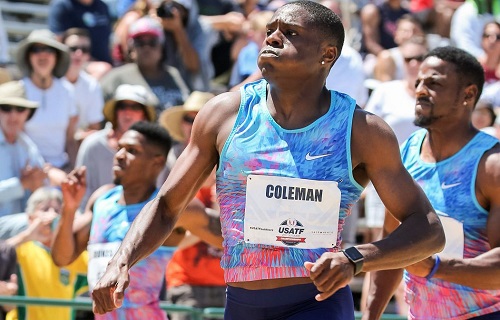 Christian Coleman's produced one of the highlights at the 2019 Gyulai Istvan Memorial in Székesfehérvár, Hungray on Tuesday, July 9.

Coleman dominated the 200m race from the gun clocking a new meet record and his new season's best time of 19.91 seconds. The 23-year-old American in the process beat the defending World champion Ramil Guliyev of Turkey and Canadian Aron Brown, the 2-time World championships bronze medalist.

In the women's 200m dash, the Olympic 400m champion, Shaunae Miller-Uibo of Bahamas clocked the joint 5th fastest time this year in the World of 22.19 seconds. Miller-Uibo finished miles ahead of Marie-JoséeTa Lou (22.76) and Jenna Prandini (22.88).

Kenya's Michael Kibet clocked a blistering 23.6 seconds in the last 200m to take down defenging 5000m World champion Muktar Edris of Ethiopia in the men's 3000m.  Kibet flew across the finish line with the 7th fastest time this year in the World of 7:38.43 while Edris who in the final meters managed to beat his compatriot Telahun Haile clocked 7:39.52 to take second place.

Poland's Paweł Fajdek with a massive 80.49m thorw won the men's hammer while Alexandra Tavernier of France was the winner in the women's hammer throw with 72.84m.

In the women's long jump Russia's Yelena Sokolova leaped 6.81m to win the event. Sokolova defated Ivana Spanovic of Serbia by only one centemeter.