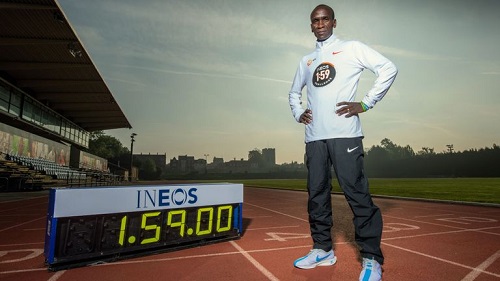 Eliud Kipchoge will try to break the two-hour barrier for the marathon in Vienna in October.

The Olympic champion and World record holder, Kipchoge, for the second time will attempt to run the marathon under two hours at the Ineos 1:59 Challenge.

“Eliud Kipchoge is the greatest ever marathon runner and the only athlete in the world who has any chance of beating the two-hour time. Nobody’s been able to achieve this. It’s not unlike trying to put a man on the moon.” The Ineos chairman, Sir Jim Ratcliffe, said.

Kipchoge added: “I’ve been informed Vienna has a fast and flat course, nicely protected by trees. The course is as well situated in the heart of this beautiful city, which will enable a great number of spectators to be part of this historical event.”

In his first attempt of a sub-2-hour marathon on the Formula One race track in Monza Italy Kipchoge clocked 1 hour and 25 seconds. His time was not a record eligible since he was assisted by pacemakers who ran set sections of the course.

Kipchoge clocked an official World recrd of 2:01:39 at last years Berlin Mararhon. He also clocked the second fastest marathon in history at this year in London.

Very excited about Vienna being the setting of @ineos159challenge. It has all the aspects of a beautiful and succesful course this October. I hope to see you all there!