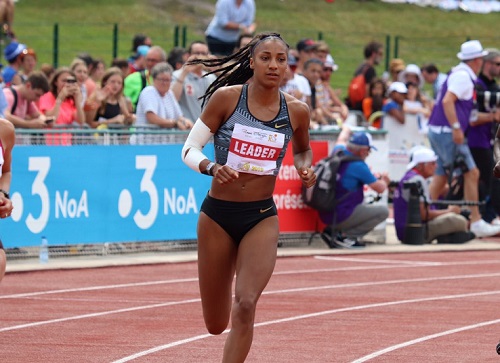 On Saturday Thiam set a new World best in the heptathlon high jump clearing 2.02m. She concluded day 1 in the lead with an impressive 4133 points. When she scored 7013 points in Gotzis in 2017, she finished day one with 4056 points.

Day 2, the reigning Olympic champion started with a new Belgian heptathlon long jump record of 6.67m and scored 5195 points after five events. At the same stage during her 7013 point PB performance in Götzis in 2017 she had 5083 points. Unfortunately in the javelin Thiam injured her elbow in the opening round in which she achieved 47.25m (more than 12m short of her personal best).

"Disappointed that my heptathlon didn’t finish the way I was hoping for. 2nd day started perfectly with a new long jump PB and belgian record."

"Unfortunately I hurt myself in the javelin. I tried to carry on because I could go for a big score but the pain I felt after the 2nd throw was too intense to continue." Thiam wrote on her Instagram page.

The 24-year-old Belgium athlete returned to track to compete in the final event the 800m with her elbow strapped up, in which she clocked 2:20.46. Her total score was 6819 points a new World lead.