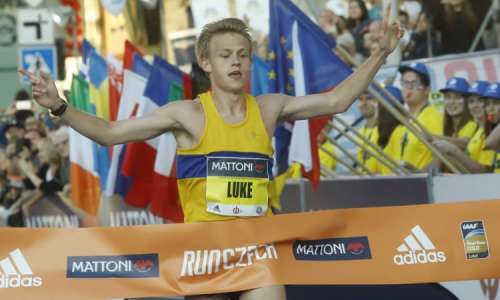 The RunCzech initiative aimed to support European athletes – EuroHeroes project – enters this season with great expectations and a new format offering four events and a special extra bonus for the best three men and women. Two best results out of four will be counted according to the special ranking system.

“We want to raise European athletes to a higher level. This is the second race of the EuroHeroes Challenge, so after it we will know better the positions of various athletes in the ranking, ” said Václav Skřivánek, the RunCzech race director, at today's press conference.

The first race was dominated by the Italian Yassine Rachik in the new Mattoni Karlovy Vary Half Marathon European event record. The organizers increased the competition in České Budějovice by bringing Luke Traynor to the start field. The young British athlete has a better personal maximum than Rachik, and he wants to defend last year's victory and keep the event record. "There will be a need for someone to run with me at a fast pace,” Traynor said.

The winner among women from last year’s edition, Lilia Fisikovici from Moldova, also came to defend her victory, but this time she will have a very capable rival Volga Mazuronak from Belarus. “I'm looking forward to the race tomorrow. I won here last year. Tomorrow I want to run under 1:10:45. I will stick to Ukrainian colleagues and I believe it will be a great race, ” she said. Fisikovici takes the RunCzech project EuroHeroes very seriously and has joined other races to keep its lead until the final race in Ústí nad Labem. "Winning EuroHeroes is a great motivation for me, so I will definitely race in Olomouc in fourteen days," added Lilia.

The Mattoni České Budějovice Half Marathon will start on Saturday at 7 pm and will be broadcast live on iVysílání.cz and on ČT Sport channel from 6.50 pm. The race weekend also includes dm family run, which starts at 5 pm and will welcome other 3,200 participants.


The ladder of EuroHeroes Challenge before Mattoni České Budějovice Half Marathon