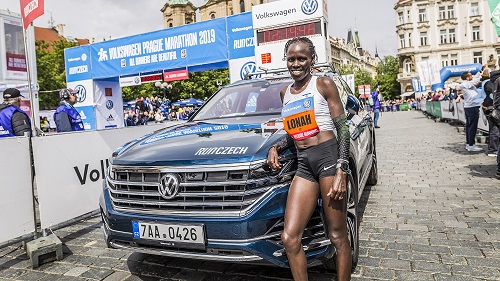 Cool temperatures and enthusiastic crowds of spectators helped produce fast times at the 25th Anniversary of the 2019 Volkswagen Prague Marathon, an IAAF Gold Label Road Race. A new sub 2:20 course record for the women and the second fastest time in event history for the men were in the headlines.

On a partly cloudy morning with light winds and very nearly ideal conditions and a temperature of 5 degrees celsius at the start some 10,000 runners began their journey through the historic streets of Prague. Looking for fast times a group of eight runners followed three pacemakers across the famed Charles Bridge and on to the 5k mark in 14:49 a sub 2:05 pace meaning that a new course record beating the 2:05:39 mark from 2010 by Eliud Kiptanui was within reach.

By halfway reached in 1:02:51 a group of eight men including pre race favourites Almajoub Dazza and Amos Kipruto still followed the three pacemakers, but they had slowed just slightly and had fallen behind course record pace. As the race progressed the pacers with their work done stepped off and a group of five men remained, with Dazza and Kipruto continuing to do most of the leading. Eventually all of the work by Amos took its toll and when the Moroccan born Dazza, who competes for Bahrain, increased the pace at 40k the others were not able to respond. He continued to increase his lead to the finish in 2:05:58 the second fastest time in race history and 20 seconds ahead of the Ethiopian, Wolde Dawit, who produced a personal best by over three and a half minutes (2:06:18). The third came in Bantiye Aychew (2:06:23, ETH).

In the women’s race a group of five women including Lonah Salpeter of Israel, Eshete Shitaye of Bahrain, Lucy Cheruiyot of Kenya, Ethiopian Yalew Genet, and Kellyn Taylor from the U.S. followed a pacemaker through 5k in 16:42. By 20k Lonah Salpeter had gapped the other women and passed the half in 1:10:12 as Bornes Jepkirui Kitur, Shitaye Eshete and Genet Yalew remained a few seconds behind her, but by 30k she had moved over one minute clear of her pursuers and was heading under the former event record of 2:21:57. Although the wind increased in the latter stages of the race she continued to increase her pace in the second half for a negative split of 1:09:33 as she finished in 2:19:46 becoming the first woman to break 2:20 in Prague. The new national record earned her a big payday with prize money and bonuses totalling 75,000 Euros. Her result is the third best European performance ever and the fourth best of this year’s season. The second among women was Eshete Shitaye (2:22:39, BRN) and the third – Yalew Genet (2:24.34, ETH).

The first European finisher was Hamid ben Daoud who competes for Spain in 6th with a 2:08:14 while another Israeli national record fell to Amare Girmaw who finished 8th in 2:09:54. The top Czech runners were led by Vit Pavlista who defeated the perennial local favourite Jirka Homolac with a PB of 2:16:30 while Petra Pastorova topped the local women in 2:42:23.

Because the Volkswagen Prague Marathon is an IAAF Gold Label Road Race the top five men and women finishers including the American, Kellyn Taylor, who finished fourth are now qualified for the 2020 Tokyo Olympics subject to selection by their national federations.

You can watch the short highlights of the race here