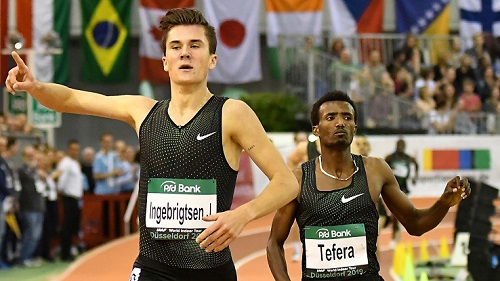 In a thrilling final lap, the 18-year-old Ingebrigsten beat Tefera and stopped the clock at 3:36:02 shaving 0.19 seconds from his own World junior record he set ten days earlier. Tefera, who broke Hicham El Guerrouj’s  22-year-old 1500m world indoor record with 3:31.04 last Saturday, was second with a time of 3:36.34.

Other highlights include, Marie-Josee Ta Lou World lead of  7.02 seconds in the women's 60m final.

Su Bingtian dominated the men's the 60m final. The Chinese sprinter clocked 6.49 seconds just 0.02 outside of his world-leading time he set in Birmingham last Saturday. USA's Bryce Robinson took second in 6.57, edging Michael Rodgers who was given third with the exact same time.

Elsewhere,  Spaniard Alvaro de Arriba claimed the 800m race in 1:46.63. Naoto Tobe of Japan and China's Wang Yu both cleared 2.34m. Tobe was given the win as he cleared the height on his first attempt while Wang with his second. For the Chinese athlete, it was a new national indoor record. Yulimar Rojas of Venezulea  prevailed in the women's triple jump with 14.46m. Russia's Anzhelika Sidorova cleared a new meeting record of 4.77m to win the pole vault contest.