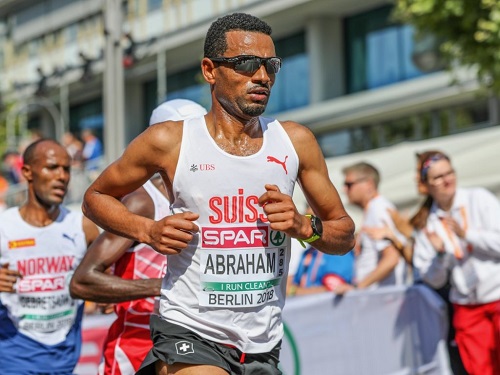 Switzerland’s Tadesse Abraham will have his sights on an historic personal milestone when he attacks the European Marathon Record of Britain’s Sir Mo Farah at the 2019 Standard Chartered Dubai Marathon on January 25.

Despite Farah cutting the European Record to 2h:05m:11s at the Chicago Marathon just three months ago, Eritrean-born Abraham is gearing up for a full-on assault on the time when he makes his debut appearance at the Middle East’s only IAAF Gold Label Marathon.

If he breaks the record, it will signify the climax of a remarkable journey for the 36-year-old. Born and raised in Eritrea, Abraham had to run 20km to school each day at an altitude of 2,400m before embarking on a running career that saw him represent the country of his birth at the World Junior Cross Country Championships in 2004.

The same year, he took the courageous step of leaving his team and moving to Switzerland to start a new life. And while it was a drawn-out affair to get Swiss citizenship, he was finally eligible to compete for his adopted homeland at the 2014 European Championships in Zurich where he finished ninth and helped Switzerland to the bronze medal in the marathon team event.

Since then he was won gold at the 2016 European Half Marathon Championships and finished fourth at the 2016 Seoul Marathon where he set his current personal best of 2:06:40. It means breaking Farah’s European Record would mean shaving more than a minute off his own PB but it has always been a personal goal and Abraham is focused on giving it his best over Dubai’s notoriously flat and fast route.

“I love my job as a runner and I treat it with great respect, which means not only strictly adhering to my training programme but also giving it my full concentration,” said Abraham.

“I also allow myself sufficient recovery time because this is an important success factor. During my marathon preparation I run about 200km per week. Intensive training also involves a faster, long run of 32-40km and marathon tempo runs with intervals that are somewhat faster than the marathon pace. I have big goals but as the proverb says: ‘Only with an impossible goal can you achieve what’s possible.’”

Held under the patronage of HH Sheikh Hamdan bin Mohammed bin Rashid Al Maktoum, Crown Prince of Dubai, and staged under the aegis of the Dubai Sports Council, the 2019 Standard Chartered Dubai Marathon will see Abraham and the rest of the elite runners get underway at 6am on January 25, five minutes after the wheelchair athletes.

The mass Marathon runners will take to the course at 7am, the 10km Road Race runners at 8.30am and the 4km Fun Run entrants will join the event at 10.30am. Those looking to register can still do so by visiting the official websitedubaimarathon.org.