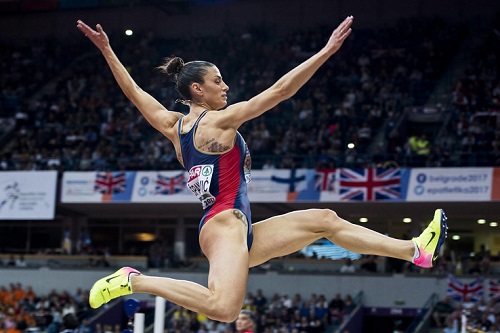 7,000 tickets have already been sold and the organizers expect 12,000 spectators for the world’s biggest indoor athletics meeting. The programme consists of seven events: men’s and women’s 60m and 60m hurdles, men’s pole vault, women’s long jump and the debut discus team competition featuring men against women, four on each side.

The fans are guaranteed that the ISTAF INDOOR continues its tradition for memorable presentation in the Mercedes-Benz Arena. Pyrotechnics, music and light show will highlight the athletes. It’s a style which the meeting director Martin Seeber believes sets the meeting apart: “The unique format of the ISTAF INDOOR, with showbiz elements and our fantastic fans able to be so close, pushes the athletes to top class performances. Having the discus in an indoor arena is already unique. Now we want to give the fans, who will be in the thick of the action, an exciting team discus competition. I think they can expect a great evening.”

Renauld Lavillenie will be a familiar face to Berlin’s athletics fans. The current world indoor record holder in the men’s pole vault with 6.16m not only has three world indoor titles to his credit in addition to the Olympic gold won in London in 2012, he holds the meeting record with 6.02m from 2015 and remains the only vaulter to have cleared 6 metres in this arena. But he will not be able to rest on his laurels, having finished third in last year’s competition.

Anticipation will also be sharpened among the home fans for the women’s long jump where the reigning World indoor champion, Ivana Spanovic, meets Germany’s European champion this year, Malaika Mihambo. Spanovic has a best of 7.24m indoors and is also Olympic bronze medallist from Rio in 2016. She won the competition here with an impressive 6.87m in 2017. But she and Mihambo finished the outdoor season with a season’s best of 6.99m for joint second in the world season’s list, suggesting a close competition could put the meeting record of 6.95m in danger.

Gina Lückenkemper will carry the home fans’ hopes in the women’s 60m. The European 100m silver medallist this year achieved her fastest ever time of 7.11 in the last indoor season. Her compatriot Pamela Dutkiewicz should be a strong contender in the women’s 60m hurdles with a World championship bronze medal in 2017 and a European silver medal outdoors this year to her credit. Dutkiewicz ran 7.88 here last year. The meeting record is held by Australia’s reigning World champion Sally Pearson with 7.79.

The prime innovation this year will be the team discus competition, men versus women, four on each side with each taking six throws. The best distances achieved by each athlete will be added and the total will decide the outcome, with the women throwing their usual, lighter implement. The concept has found favour with competitors on either side: Christoph Harting, the reigning Olympic champion, described it as: “A cool idea. I think we men will win. We have more experience [throwing indoors]. ISTAF INDOOR is the only indoor meeting of its kind in the world and we’ve already experienced it five times, the women have done it just once.” One of his opponents on February 1, this year’s European bronze medallist Shanice Craft, likes the idea just as much but expects a different outcome: “Getting a team together and competing against the men is going to be great. No question who will be the stronger sex, us women will come out on top, we’re better at holding our nerve,” said the German.

Another innovation will be a Fan-Zone, where spectators can meet their track and field heroes and heroines. It’s part of the event’s style, as meeting director Martin Seeber confirms: “ISTAF INDOOR stands for elite sport, so close you can almost touch. Our aim is to continue to bring athletes and fans closer together, we want to have track and field stars and role models accessible.”