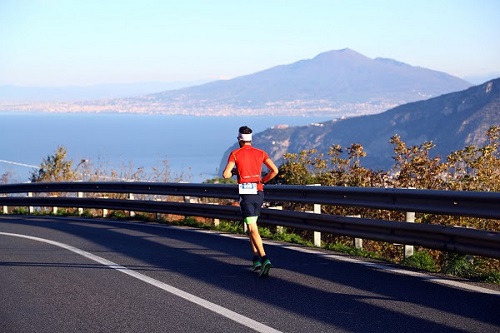 SORRENTO – Course records, record in number of participants, a combination of bright sun, clear sky and deep blue sea, important guests such as George Hirsch, Chairman of the Board of Directors of New York Road Runners, and Glenn Latimer, head of the elite athletes of the London Marathon, a passionate team of Napoli Running assisted by more than 300 enthusiastic volunteer. This is Sorrento Positano, the event that has completed the RunCzech running season 2018. The event that will remain in history and marks today a new starting point for an exciting future.

Ultra Marathon 54km and Panoramic 27km – the two distances that have welcomed over 1500 runners and other hundred participants in the Family Run & Friends 2km dedicated to families and children of all ages who with their excitement have colored the streets of Sorrento already dressed in party for Christmas.

The absolute master of the race was Carmine Buccilli (Asd Atl. Santa Marinella) from Lazio region that since the first steps of the 54km has created a gap behind, finding himself immediately without rivals able to fight with. At that point the challenge became only with the chronometer, to beat the 3:28:44 set by Stefano Velatta last year. Mission accomplished, Buccilli arrived in corso Italia of Sorrento with the record time of 3:18:23. “A fantastic race, endless emotions, hard at the right point” - Carmine's first words at the finish line . “A bit of crisis on the way back after the turning point, from 31 to 43km, a lot to climb, but it's worth it, the next descent is pure fun. This is a race that deserves to grow. For me, after the Turin Marathon, this victory was important to finish the season in a positive way ". Behind him, even if well detached from Buccilli, Federico Borlenghi, ex ultramaraton italian national team, racing for the Cremona Stradivari Triathlon club in 3:43:09. “What a beautiful race! I'm really excited about this path and this day that I will remember forever. I am also satisfied with my result. Of course the climb after 35km is hard, but that's okay, it's part of the game and we're here to have fun.” Bronze medal went to Maurizio Di Paolo (Passologico) with 3:54:03.

The first among women was again the last year winner from Finland – Noora Katarina Honkala who finished smiling in 4:01:01, thus improving the course record by almost 14 minutes. Her result placed her sixth overall in the race, men included. “It is a fantastic race! I often run the 100km but this is also a great workout for those who run ultramarathons. I truly advise you to come to Sorrento and run it!” Second position was for Teresa Mustica with 4:33:01, while third for Chiara Angeli 4:40:44, both from Italy.

The Panoramic 27 km race was also full of emotions. Italian Mohamed Hajjy set the course record clocking at 1:33:08. “Very nice race. This is the first time I participate and I'll be back for sure. I have made more than 130 marathons all over the world, winning 90. Next week I will do the Reggio Emilia Marathon, the following Sunday the one in Pisa, but today I could not miss it. Very beautiful, amazing course that takes your breath away. Congratulations to the Sorrento Positano and the organizers.”

Also for the Panoramic 27km there was an intermediate point at the 21.097 km. Gran Premio Nastro Verde was awarded to Mohamed Hajjy and Paola Di Tillo.

Although last year, due to a heavy rain, Carlo Capalbo, the founder of Napoli Running project and the President of the RunCzech organizing committee exclaimed “Wet race, lucky race”, this year the results and emotions could be even more positive: "We are happy, we doubled the numbers compared 2017 and organized a nice party in the streets of Sorrento. As an organization I think we have improved a lot but we can still do more, for sure it will be even better on 1 December 2019. I want to thank everybody in Sorrento. I love saying ... today we are all Sorrentini.”

The next event organized by RunCzech in Italy will be the Napoli City Half Marathon held on Sunday, February 24, 2019. More than 8 thousand runners from around the world are expected to challenge the course of Naples. The registrations are open at www.napolirunning.com.