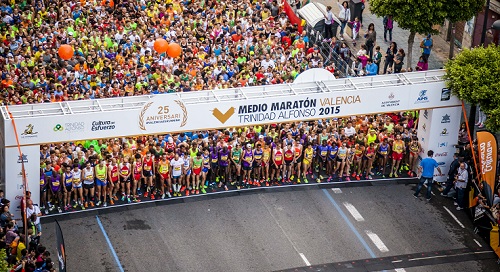 Here are the top road and cross country races to follow on the first weekend of December 2018.

NXN is the biggest and most important high school cross country championships in the United States where individual and club qualifiers from eight regional championships will compete at Glendoveer Golf Course, Portland OR to be named national champions.

Once again the Valencia Marathon organizers have assembled a high-quality men's and women's elite fields.

Kenya's Sammy Kitwara is returning to beat his course record of 2:05:15 from last year. But to defend his title or to break his own CR, Kitwara will have to beat Ethiopian Leule Gebrselassie who set his personal best of  2:04:2 in January and his fellow-countryman Jemal Yimer who set the Ethiopian Half-Marathon record of 58:33 last year in Valencia.

The women's elite field includes five sub-2:30 runners. Kenya's Philomena Cheyech PB (2:21:22) together with the defending champion Aberu Zennebe of Ethiopia will challenge the course record of 2:24:48. Other runners that will definitely be in the mix for the podium are Meseret Mengistu Biru (PB 2:25:58), Tinbit Gidey Weldegebriel (PB 2:26:48), and Hayimanot Alemayehu Shewe (PB 2:25:51).

Japanese marathon season is continuing with the 72nd edition of the Fukuoka International Marathon. Yuta Shitara and several other sub 2:10 local runners will try to win the race for Japan for the first time in 14 years. There are only four East African runners in the men's elite field.  The fastest man in the field is Ethiopia's Yemane Tsegaye who set his PB of 2:04:48 at 2012 Rotterdam marathon. There is also Kenya's 2011 World Championships silver medalist Vincent Kipruto who clocked his personal best of 2:06:14 at last year's Berlin Marathon and Ghirmay Ghebreslassie of Eritrea who finished 4th at 2016 London Marathon with a 2:07:46 PB.

California international marathon is on the biggest marathons after New York, Chicago, and Boston. What makes this race even more exciting is that 2018 CIM is also a USA marathon championship.