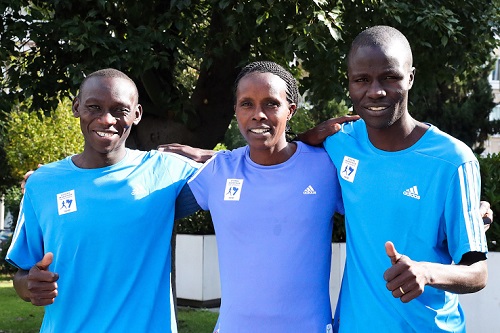 “The legend continues. Each year the Athens Marathon gets better and better,” said Paco Borao, President of AIMS, the Association of International Marathons and Distance Races, at the press conference for the “Athens Marathon.

The Authentic.” A record entry of 18,750 runners will be on the start line on Sunday. The course follows the original marathon route of the first Olympic Games of the modern era in 1896, beginning at the town of Marathon and running over a severely undulating route into the old Panathinaic Olympic Stadium. Taking into account other, shorter races held in conjunction with the main event, around 55,000 runners are expected to participate in the “Athens Marathon. The Authentic.”

The marathon course goes through the small town of Mati, where around 100 people lost their lives as fire swept through the area in summer. The Hellenic Athletics Federation SEGAS, who organize the race, have launched a project called “Runners’ Forest” to support the regeneration of the region. The aim is to raise funds for trees to be planted for about four kilometres between 12 and 16 kilometres along the course. More information and details for the fund raising bank account can be found at: https://www.act4greece.gr/ actions/Action_dasosdromeon

A prime target in the men’s race is to attack the course record on Sunday. “We have strong runners from Kenya, Ethiopia and Uganda in the field. They are ready to break the course record. The aim is a time of 2:09,” explained Rachid Ben Meziane who is responsible for assembling the elite field. No-one so far has run under 2:10 on this course. The record is 2:10:37 by the Kenyan Felix Kandie four years ago.

The fastest runners on the start list are from Kenya. Felix Keny won the Valencia Marathon in 2013 in 2:07:14 which remains his personal best and he will need to improve on recent results to regain that level of going under 2:10. His fellow Kenyan Bernard Chepkwony has a best of 2:10:42 and expressed his confidence in clear terms: “Training OK, no problem OK, everything OK.” Others in contention should be the Ethiopian Alebachew Wale with a best of 2:09:40 and the Ugandan Alex Chesakit. The latter’s lifetime best is 2:11:01 and he finished a creditable seventh in the Commonwealth Games Marathon in April on Australia’s Gold Coast.

The women’s race could turn into a Kenyan duel with Shelmith Muriuki showing a personal best of 2:38:18 in the Nairobi Marathon, run at altitude. Performances there have often heralded a considerably faster time at sea level. She also finished tenth in the Commonwealth Games Marathon this year. Rebby Koech has a best of 2:33:48 and her response in terms of coping with Athens’ renowned hills was: “I live and train in Iten and that has more hills than Athens. I am ready to race.” The fastest woman on the start list is Ethiopia’s Jemila Wortesa Shure with 2:32:00 but she went close to that time only a month ago with 2:32:32 at the Kosice Marathon so she will have to have recovered quickly.

Greek interest centres upon Kostas Gelaouzos, the best home performer in last year’s race with 2:21:55. Making her marathon debut will be Elevtheria Petroulaki who won the Athens Half Marathon in 1:20:01 in spring.

Before the leading runners cross the finish line in the Marble Arena on Sunday, the “Athens Marathon. The Authentic” will stage a unique premiere. The Cypriot composer Giorgos Theofanous has written a hymn specially for the race which will be performed by the Greek Radio Symphony Orchestra in the stadium.