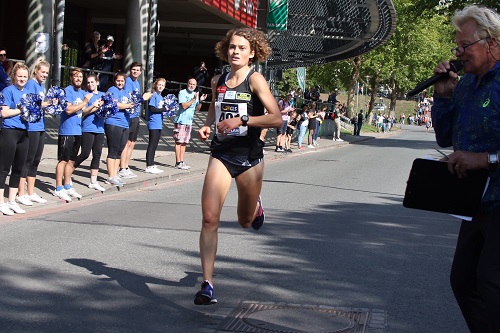 21 year-old German Alina Reh continued her rise with another stunning performance, winning the race with a personal best of 31:23. The defending champion improved her own national record in the „under 23“ category  and moved forward to position twelve in the European alltime list for 10 k. There was an upset in the men’s race as Kenyan newcomer Vincent Kibet became the winner. The 19 year-old clocked 27:21 which makes him the fourth fastest athlete in the world this year. In sunny but windy weather conditions organiser BERLIN RUNS registered a field of 7,312 competitors.

Despite some strong winds a fast race developed in the men’s contest. After an initial first kilometre split of 2:40 the leading group reached the 5 k mark in 13:47. It was around the six kilometre mark, when Vincent Kibet charged ahead, dropping the favourite and defending champion Mathew Kimeli. For Kibet his first race outside Kenya became a memorable international debut. He ran the second half in 13:34 and crossed the line with 27:21, which is the third fastest winning time in the history of the race. „My next goal is to qualify for the World Cross Country Championships,“ said Vincent Kibet, who lives in Iten. With his winning time the Kenyan confirmed the race’s position as one of the fastest 10 k events in the world. Only Prague and New York produced faster times so far this year.

Kenya’s Gladys Kimaina took the lead in the women’s race early on. She was in front until around 8 k when Alina Reh reached and passed her. There was no way back for Kimaina against the extraordinary German talent. „This was my last race of the season. And before having a three-week break I wanted to give everything that was left,“ said Alina Reh, who had improved to 69:31 in the half marathon in Cologne just a week ago. However her result from the The Bridgestone Great 10k is the one that really stands out. A year ago Alina Reh won this race with 31:38, now she improved her personal best by 15 seconds. With 31:23 the German is the second fastest European this year and missed the continental leading time by just three seconds. Alina Reh is now 14th in the world season’s list.

Behind the German winner, who is only 26 seconds away from Irina Mikitenko’s national record of 30:57, Gladys Kimaina took second with 31:46. Third placed Fabienne Schlumpf ran a national record for Switzerland with 32:01. While Poland’s Karolina Nadolska took fourth place with 32:14 Germany’s marathon runner Katharina Heinig followed in fifth place in 33:36. As Arne Gabius she will compete in the Frankfurt Marathon.