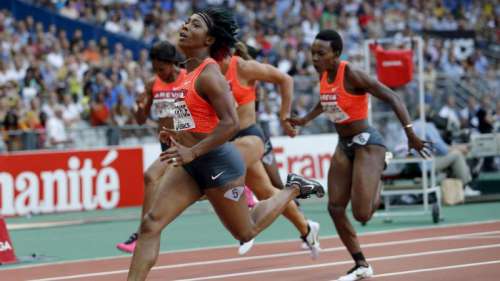 Kingston, Jamaica – Thursday, June 7, 2018 – The Pocket Rocket, Olympian Shelly-Ann Fraser Pryce returns to the track on June 9, 2018 – and pay- per- view on www.1spotmedia.com is the place to watch. The 100 metre Olympic gold medallist will make her first appearance at home at the third stagingof the JN Racers Grand Prix dubbed “Stars: The Next Generation” – June 9 at 6:00 pm CST.

Sign up now on www.1spotmedia.com to access your pay-per-view pass for US$8.99. The JN Racers Grand Prix is a premier track and field meet featuring some of the best local and international athletes. This year’s meet will feature appearances from over 50 athletes including Jamaica’s very own Yohan Blake, Kemar Bailey-Cole, Julian Forte, Javon Francis, Shericka Jackson, Kaliese Spencer, Ristananna Tracey, Traves Smikle, Great Britain’s Miguel Francis and Natasha Hastings of The United States, Kelly-Ann Baptiste of Trinidad and Tobago and Jamal Wilson of The Bahamas.

Outside of Jamaica, patrons of the JN Racers Grand Prix can log on to the pay- per- view experience and access the event live anywhere, anytime, across the globe by downloading the 1spotmedia App from Google Play Store or the Apple App Store on any mobile device.

They may also visit www.1spotmedia.com on a personal computer. Viewers in Jamaica can watch the event on the go via TVJ and TVJSN for FREE on www.1spotmedia.com or on the 1spotmedia app. The 1spotmedia portal is the latest media platform from The RJRGLEANER Communications Group that delivers live and engaging content from Jamaica for the world to see anywhere and at any time.

There are thousands of hours of video on demand and live streaming of the Group’s four television brands [TVJ, TVJSN, JNN and RETV] as well as their five radio brands [RJR 94FM, FAME 95FM, Hitz 92FM, Power 106FM and Music 99FM] with credible content.