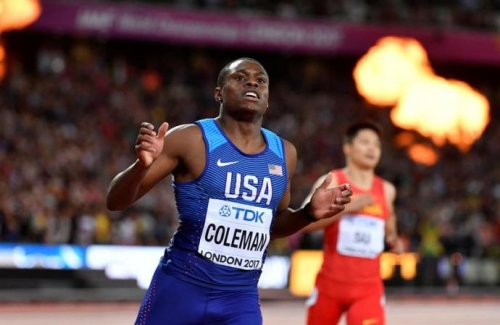 But Coleman's record will not as count as a new World record.

And here are two very important reason why Coleman's 6.37 second performance in 60m dash won't count as a World record.

Electronic starting blocks, along with doping testing, are two of the requirements for a world record, USA Track and Field official Duffy Mahoney told Reuters on Saturday.

According to IAAF competition rule-book (Rule 260.14 (e)); in order a world record to be ratified in an event at 400m or less, electronic starting blocks that record reaction times must be used.

"For World Records in Running and Race Walking Events:

(e) For performances up to and including 400m (including 4 × 200m and 4 × 400m) under Rules 261 and 263, starting blocks linked to an IAAF certified Start Information System under Rule 161.2 must have been used and have functioned correctly so that reaction times were obtained and are shown on the results of the event."

At Clemson Invitational on January 21, no electronic starting block devices were used and no reaction times were recorded.

Since there were no drug testers on on site, Coleman drove towards Atlanta, Georgia, two hours away, to meet testers at a road side stop, provide a required sample and fill out paperwork as a part of the record ratification. USA Track and Field requires drug testing within 24 hours of finishing the race, while IAAF requires testing ON SITE in order for a mark to be ratified as a world record.

While USATF should be ok with the new record, the IAAF more likely will not a approve Coleman's World record.