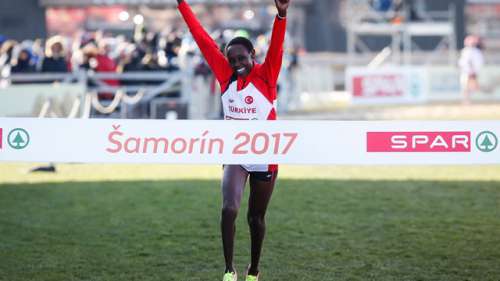 Can, who will celebrate her 21 birthday tomorrow, became the second women in European Cross country championships history to retain the title. The Turkish athlete broke the tape in the women's 8km race in 26:48 to finish almost 100m ahead of Sweden's Meraf Bahata, who held of Norway's Bjerkeli Grovdal for the silver.

"It was not easy race as it is very windy and cold here. The wind was pushing me back. However, I like to keep in my own rythm - to slow down and speed up whenever I want, so I did not mind I had to to run on my own. I kept pushing till the end and I enjoyed my run very much. Tomorrow I will have my 21st birthday so I am happy I gave myself this gold medal present." Can told reporters after the race.

A mad dash in the start of the senior women's race at the SPAR European Cross Country Championships. pic.twitter.com/M1hrxwbWJv

Turkey's Yasemin Can becomes just the second woman in history to defend her senior title at the SPAR European Cross Country Championships.

Confirmation of the results in the senior women's race at the SPAR European Cross Country Championships with Turkey's Yasemin Can defending her title. pic.twitter.com/FYsie5yRey