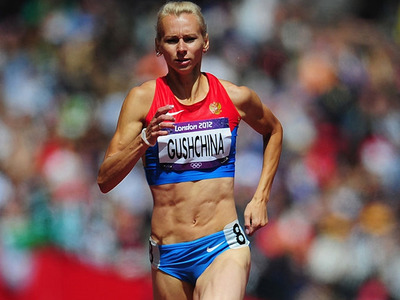 Russian sprinter Yulia Gushchina was disqualified from the London Olympic Games after testing positive for banned substances, the International Olympic Committee (IOC) said in a statement on Thursday (30).

Gushchina was previously stripped of three relay (4x100m and 4x400m) medals she won in the 2008 Beijing and 2012 London Olympics after one of her team mates tested positive for doping.

In London Olympics Gushchina failed to make the 400m but with Russian team she claimed the silver medal in the 4x400m relay. The Russian team was later disqualified after Antonina Krivoshapka tested for doping retrospectively in February this year.

In Beijing in 2008 Gushchina won gold in the 4x100 and silver in the 4x400 but she had to hand those medals back as her teammates had failed doping tests.

The IOC also said on Thursday that Russian athlete Anna Nazarova had failed a retrospective test from 2012 London Olympics.  Nazarova  finished fifth in the women's long jump final in London.