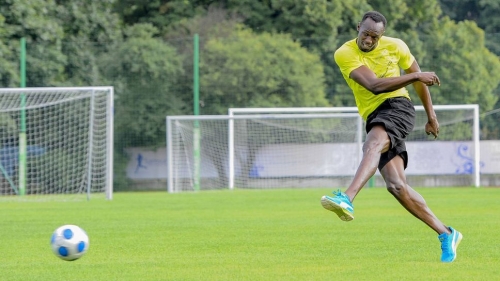 World's fastest man Usain Bolt has recovered from a hamstring injury and has resumed his training.

Usain Bolt says he has fully recovered from a hamstring injury he suffered during the 4x100m final at the World Athletics Championships in London in August. After that the 31-year-old Jamaican retired put an end to his track and field career.

Having retired from athletics, Bolt announced that he will try to become a serious football (soccer) player. In September Bolt was offered to train with world famous German Bundesliga and UEFA Champions League team Dortmund Borrussia. However it is unclear if the 8-time Olympic champion will take up the offer.

“It’s something that I want to do. I’m trying to get fit now,” Bolt said of playing professional football.

“My doctor finally passed me after my hamstring problems at the world championships, so now I can start training. I’ve started training while I’m here (Australia) and trying to get into shape before I get home and next year I’ll get a trial and we’ll take it from there,”

“When I put my mind to something, I’m going to do it. I’m going to train hard, put myself through some drills. Coach of the team in Jamaica – I’ll do some work with him also to figure out the finer details.” he added.