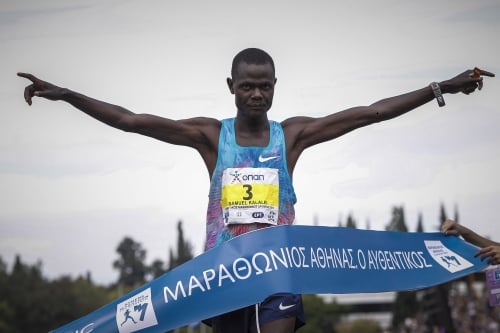 Kenya’s Samuel Kalalei and Bedatu Hirpa Badane of Ethiopia wrote their names in history by becoming winners of the 35th Athens Marathon. In warm conditions and with the historic course presenting its annual challenge of rolling hills followed by cruel descent, Kalalei surged away from his compatriot Milton Rotich with seven kilometres remaining. Kalalei was able to celebrate his 23rd birthday a day early with victory in 2:12:17; Rotich, continuing his return to form after lengthy injury, finished second in 2:14:18 and Jonathan Kiptoo completed the all-Kenyan podium with 2:16:08.

The women’s race was only decided over the last few metres within the marble Panathenaic Stadium. Ethiopia’s Bedatu Hirpa Badane, a World Youth champion on the track four years ago, ran a personal best of 2:34:18, just four seconds ahead of Alice Kibor of Kenya. Last year’s winner on her marathon debut, Nancy Arusei, finished third but the Kenyan had the consolation of improving her best by over two minutes to 2:34:51.

The Athens Marathon. The Authentic proved more popular than ever with a record entry of 18,500 eager to experience the original marathon course from the town of Marathon to the 1896 Olympic Stadium in Athens.

Temperatures rising above 20 degrees Celsius by the 9 a.m. start removed a possible attack on the men’s course record of 2:10:37 from the agenda. The leading group reached halfway in 65:58, climbing for much of the way, and by that point were reduced to five. The pace was on course for a finishing time around 2:12 and gradually whittled down the group till two men were left in contention, Kalalei and Rotich, along with fellow Kenyan pacemaker Alfred Cherop. The latter’s work was done once he had led the duo through 30km in 1:34:20.

Both Kalalei and Rotich looked relaxed at that point, not showing signs of strain. But once past 35km, Kalalei surged and his rival had no answer. “This was no easy race,” explained Samuel Kalalei, “When I moved away after 35 kilometres I saw that Rotich couldn’t follow me.” On this tough course Kalalei ran his second fastest marathon, only missing his best of 2:11:47 by half a minute which suggests he is capable of much more, given the challenges that the Athens course poses. It’s a view shared by his manager Marc Corstjens: “I knew he was well prepared. Samuel was third at the Stockholm Marathon in June and that is also not an easy course. We thought he would run well here.” 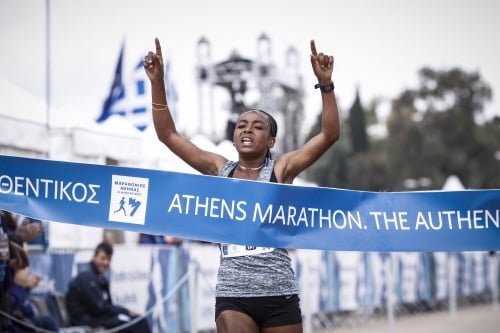 A close contest for the women’s title throughout the race ended with the fastest winning time for the race since 2010. Three runners were in contention at halfway, reached in 1:16:47: Badane, Kibor and last year’s winner Arusei. The latter had done much of lead work by this stage. The Ethiopian Jemila Wortesa Shure had dropped off the pace and did not finish. The group remained intact till 40 kilometres as the teenager Bedatu Hirpa Badane took control.

Four years after she won the 1500m World Youth title in Cali in Colombia, Bedatu won a marathon title in only her second race at the distance. The 18-year-old achieved a personal best of 2:34:18, taking 29 seconds off her debut for third place in Barcelona in April. Almost as pleased was the runner-up from Kenya, Alice Kibor: “I’m happy with second place and enjoyed the course. The hills aren’t as hard as the ones we have in Kenya. I will come back to Athens and run here again.”