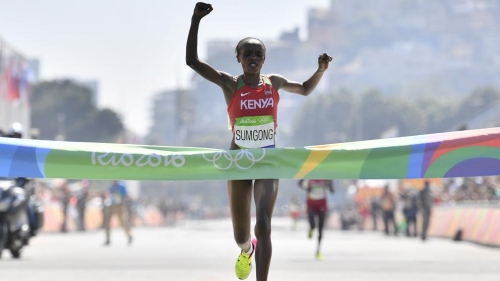 Rio Olympics marathon champion Jemima Sumgong of Kenya has been banned for four years for doping by the Anti-Doping Agency of Kenya (ADAK).

The 32-year-old Olympic marathon champion Sumgong was banned after her claim she was taking EPO for an ectopic pregnancy was turned down.

Earlier this year news broke out that Sumgong had returned positive results for a blood booster EPO (Erythropoietin) durning an out of competition doping test.

Sumgong told a Kenyan law court that she was given EPO in hospital, but her paperwork was deemed to have been provided by "an imposter" and her claims described as "not authentic".

"She has received the sanction she deserves," the chief executive of ADAKJaphter Rugut said.

"If the athlete had maybe assisted in the investigations and in revealing what happened, then there could have been a consideration to repeal the sentence. There was no such assistance from her.

"We believe in the interest of justice. This had to be done. It will become a deterrent for anybody who may believe in doing this [doping]."