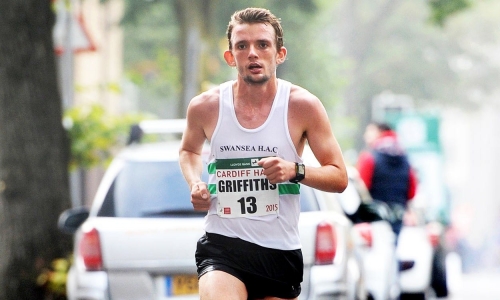 After running the fastest marathon by a Briton in three years with 2:09:49 for fifth place in Frankfurt – and on his debut at the distance – Dewi Griffiths laughs when asked if his running and lifestyle is a “throwback” to the 1980s, an era when British men and Europeans in general had considerably greater strength in depth internationally in the event.

The 26-year-old Welshman, who works with his parents on a sheep farm in Carmarthenshire, reflects that hard, physical work and a solid volume of training have done him no harm: “Back in the day, a lot of runners did manual work and ran 100 to 120 miles per week on top of it. You could probably say my lifestyle corresponds to it, I’m only running 100 miles per week and got up to a maximum of 110 in the build-up for this. I like to race a lot which the guys in the ‘80s did as well and I started doing more of that this year.”

The record for a UK marathon debutant remains with his fellow Welshman Steve Jones, who won Chicago in 1984 with 2:08:05 and went on to break the world record with 2:07:13. It’s a measure of Griffiths’ achievement in the Mainova Frankfurt Marathon that up to 35 kilometres not only was Jones’ record under threat but Mo Farah’s debut time of 2:08:20 in London in 2014, which is the English rather than British record.

The omens were good for his marathon debut this year: a personal best of 61:33 in the Cardiff Half Marathon on October 1, capping a year when he had set lifetime bests at 5 and 10,000m followed by 5 and 10k on the road. “After the run in Cardiff, I thought I’d give it a go. I was running in the second group in Frankfurt and they were going faster than planned but it didn’t faze me. I got to 30k and I was on 2:07 pace, got to 35k and was still on for low 2:08 but then…”, said Griffiths, adding that you never really know how a marathon will feel till 35 kilometres.

The answer on the Festhalle’s red carpet in Frankfurt was, pretty good, since fifth place and the second fastest marathon by a European this year confirmed his range of options for the coming year. Having graduated from university four years ago, Griffiths has been supported by his parents but does his full share of work on the sheep farm in Wales. He wanted to explore his running potential.

“I told them, I want to give it a go. They supported me and, after going to the 2014 Commonwealth Games, I don’t get any questions any more, they know I’m getting better and who knows where I can go? As for the farm work, it can be physical, it can be long hours but I guess for the marathon, you’ve got to be mentally tough and strong.”

A stress fracture to the foot prevented Dewi Griffiths producing his best at the last Commonwealth Games in Glasgow. He has possibly twin objectives in 2018, firstly doing justice to himself in the Commonwealth Games on Australia’s Gold Coast, probably in the 10,000m. Then there might be a return to Germany and the European Championships in Berlin in August. He is certainly tempted by the prospect of the marathon there: “I’m not sure what I’m going to do. Half of the reason for competing in Frankfurt was having the option, whether I do the 10k or the marathon.”

Let the final word be with the man whom Dewi Griffiths beat in Frankfurt on Sunday: the German record holder Arne Gabius finished one place and ten seconds behind the Welshman: “The Briton is strong. It’s great for marathon running in Europe – we have strong runners again.”

Strength in depth across the nations for distance running can bring nothing but good news for the sport and a sheep farmer among the hills of Carmarthenshire is playing his part to the full.