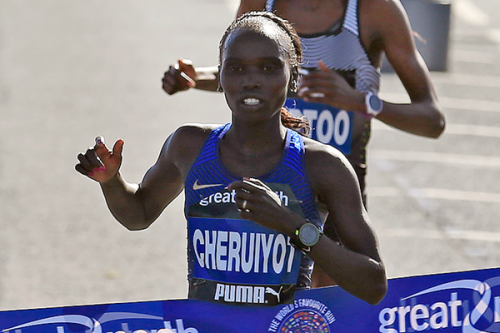 Shura Kitata Tola of Ethiopia and Kenya’s Vivian Cheryuiot won the top prizes at the 36th edition of the Mainova Frankfurt Marathon. Kitata chopped almost two minutes off his personal best in difficult conditions while Cheruiyot, the reigning Olympic 5,000m champion but now concentrating on road racing, improved her best for the marathon to 2:23:35 after her distance debut in London this April. Kitata ran 2:05:50 to win the men's title and his compatriots Kelkile Gezahegn (2:06:56) and Getu Feleke (2:07:46) ensured a clean sweep for Ethiopia. The Ethiopians Yebrgual Melese (2:24:30) and Meskerem Assefa (2:24:38) finished second and third behind Cheruiyot in the women's race. The women's champion had been on course to improve the course record of 2:21:01 but was slowed by strong winds in the closing stages.

The race was also notable for strong results by the European men. Dewi Griffiths of Wales ran a fine debut with 2:09:49 for fifth place and at one stage looked capable of breaking the UK record for a marathon debutant, held by his fellow Welshman and former world record holder Steve Jones with 2:08:05 when winning Chicago in 1984. Directly behind Griffiths came the German record holder Arne Gabius with 2:09:59 and Poland's Henryk Szost was next across the line on the red carpet of the Festhalle with 2:10:09. 14,513 runners from 108 countries took part in the Mainova Frankfurt Marathon which is an IAAF Gold Label Race. “The conditions were better than expected for the runners but still demanding enough for the runner. We were very anxious about the weather but in the end the running conditions were pretty good and that is reflected in many top quality performances among the results,” said the race director Jo Schindler. Despite difficult conditions the winner Shura Kitata Tola ran 2:05:50 for the sixth fastest winning time for the marathon in the world this year. It was also the eleventh fastest performance of the year. Arne Gabius commented on the solid European performances, notably from Dewi Griffiths, himself and Henryk Szost, that: “Things are on the up in European marathon running and that is all to the good.” As for the women’s field, eight runners finished under 2:30, another notable achievement. After a fast opening half of 62:30 the decisive move came directly after 30 kilometres in the men’s race with 1:29:42 on the clock as Getu Feleke increased the pace and ran the next kilometre in 2:51. Last year’s winner and runner-up, Mark Korir and Martin Kosgey, dropped back while only Feleke’s fellow Ethiopians Shura Kitata Tola and Kelkile Gezahegn could stay with the pace. Feleke was the first to falter, around five kilometres from the finish, despite going into the race as the fastest man with a best of 2:04:50. Gezahegn was next to succumb, leaving Shura Kitata Tola on the way to the greatest win of his career. 2017 has certainly proved the best in the 21-year-old brief career, given that he also braved wet conditions to win the Rome Marathon title in April. “I expected to win from the start. From 30 kilometres I was confident I would win as the three of us went away from the others. I hoped to run faster but the weather didn’t make it easy,” said Shura Kitata Tola. In her second marathon the Olympic 5,000m champion Vivian Cheruiyot ran a personal best of 2:23:35, improving by 15 seconds over her debut time for fourth place in London in April. She dominated the women’s race from the start, going through halfway in 70:07, more than two minutes ahead of her rivals. For much of the race Cheruiyot was on course to break the course record of 2:21:01, reaching 30km in 1:40:14. Strong winds slowed her pace, however: “Winning here has boosted my confidence. It was very windy. My body is small and running was hard. I had to knuckle down and thought I could run 2:20. But I am happy with my time. I’m still new to the marathon and can improve,” said Vivian Cheruiyot. Yebrgual Melese finished second in 2:24:30 ahead of her fellow Ethiopian Meskerem Assefa with 2:24:38. Both were able to make inroads on Cheruiyot’s lead in the closing stages. Another with good cause for celebration in the Festhalle was the American Sara Hall who continued her improvement with a personal best of 2:27:21. While Arne Gabius won the German men’s title as expected, there was a surprise outcome among the women as Katharina Heinig overtook last year’s national winner Fate Tola in the closing stages to finish eighth and best European woman in 2:29:29. Tola finished ninth in 2:30:12, both runners coming home well inside the qualifying time for the European Championship Marathon in Berlin next year. Results, Men: 1. Shure Kitata Tola ETH 2:05:50 2. Kelkile Gezahegn ETH 2:06:56 3. Getu Feleke ETH 2:07:46  4. Martin Kosgey KEN 2:09:39  5. Dewi Griffiths GBR 2:09:49  6. Arne Gabius GER 2:09:59  7. Henryk Szost POL 2:10:09 8. Scott Smith USA 2:12:21 9. Scott Fauble USA 2:12:35 10. Mark Korir KEN 2:12:37 Women: 1. Vivian Cheruiyot KEN 2:23:35 2. Yebrgual Melese ETH 2:24:30 3. Meskerem Assefa ETH 2:24:38 4. Abebech Afework ETH 2:26:45 5. Sara Hall USA 2:27:21 6. Merima Mohammed BRN 2:27:49 7. Sylvia Medugu KEN 2:29:09 8. Katharina Heinig GER 2:29:29 9. Fate Tola GER 2:30:12 10. Anna Incerti ITA 2:32:11 More information is available at: www.frankfurt-marathon.com
Live Stream