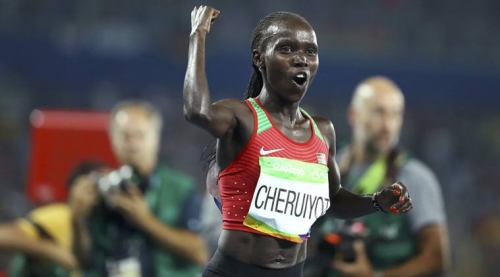 „I am grateful to have been invited to run my second marathon in Frankfurt,“ said the reigning 5,000 m Olympic Champion during a press conference in Frankfurt on Thursday. „I have prepared for this race for three months and my shape is the same as it was before my debut in London in April. My aim is to run a personal best. I know that this is a fast course and I believe that Frankfurt provided the best opportunity for me this autumn. I go into the race with a good feeling.“ When she ran her debut in London Vivian Cheruiyot placed fourth with 2:23:50.

Asked if she hopes to be as successful in the marathon as she was on the track the double World Champions from 2011 (5,000 and 10,000 m) answered: „I think I will be good in the marathon in future. My aim is to catch up slowly.“ However Vivian Cheruiyot could well make a big step on Sunday provided weather conditions will be favorable. A half way split time of 70 minutes is planned. „The perfect result for me would then be to run the second half again in 70 or even 69 minutes.“

So far no woman has ever broken the 2:20 mark in the Mainova Frankfurt Marathon. The current five year-old course record from Ethiopia’s Meselech Melkamu stands at 2:21:01. Although there are five women in the race with personal bests that are faster than Cheruiyot’s the Olympic Champion, who lives in Kaptagat with her husband and their four year-old son Allan, does not bother too much about her rivals: „I run for myself. And I don’t know in what kind of shape the Ethiopians are anyway.“