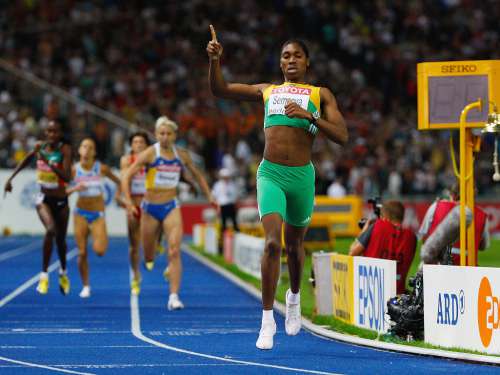 ISTAF Berlin: Eight athletes who won gold medals at the World Championships in London at the beginning of August will be in action at the ISTAF meeting in Berlin’s Olympic stadium this coming Sunday. Among them will be South Africa’s World 800m champion Caster Semenya who will run the 600m at the 76th edition of the meeting which is part of the IAAF World Challenge Series.

At Caster Semenya’s request the organizers have put a women’s 600m race on the programme rather than 800m. “Berlin is my city and I want to end my season there with a super time,” said the 26-year-old. “When things have been tough for me, I’ve always had a warm welcome at ISTAF and a lot of great support.” It is possible that Semenya will attempt to break the world best for the distance which has stood for 20 years: 1:22.63 set by the Cuban Ana Fidelia Quirot in 1997. Caster Semenya’s best is some way short of that at 1:25.56 although she ran that time back in 2012. The 600m is a distance rarely run and consequently the IAAF considers leading times as world bests rather than records.

“Even though the 600 metres wasn’t originally on the schedule, we are delighted to grant Caster Semenya’s wish and offer the ISTAF fans a spectacular race,” said meeting director Martin Seeber. The South African will face high quality rivals including Francine Niyonsaba of Burundi who has twice won silver medals behind Caster Semenya at last year’s Olympics in Rio and then the World Championships in London.

One of the surprises of this month’s World Championships was the victory in the women’s 400m of Phyllis Francis of the USA. She will run the 200m at ISTAF and among her rivals will be Britain’s European champion Dina Asher-Smith, a member of her country’s sprint relay squad which won the silver medal while she finished fourth in the 200m.

There will be more than one athlete who surprised expectations to win a world title competing at ISTAF: Ramil Guliyev of Turkey followed in the mighty footsteps of Usain Bolt to win the 200m crown. Guliyev will run the 100m, facing another world champion, Adam Gemili of Britain, who helped Great Britain win the 4 x 100m gold.

Both of Berlin’s Olympic discus champions, the Harting brothers, Robert and Christoph, will compete in their own “living room” against the newly crowned World champion Andrius Gudzius. The Lithuanian won the gold in London ahead of Sweden’s Daniel Stahl and Mason Finley of the USA. The latter will also be a contender at ISTAF.

Already confirmed to compete were the World champions Johannes Vetter of Germany and the Dutch sprinter Daphne Schippers. Vetter won the javelin title for Germany while Schippers triumphed in the 200m.