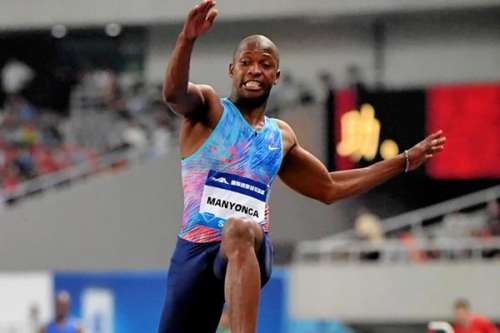 The specially set up event  will be held at 3700m (12,000ft) above sea level to help athletes achieve better results in long jump and triple jump.

In high altitude there is less air resistance due to much thinner air. Such conditions allow athletes to run faster in short sprint events, jump and throw farther.

Manyonga says he is ready to beat the world long jump record of  8.95m set by American Mike Powell back in 1991 in Tokyo.

“We have planned for the world record attempt. Karen Gibbs (physiotherapist) has been helping Luvo with special breathing exercises to prepare him from competing at 3 000 metres. We also made provision for special thermal clothing should it be really cold in the mountains.” Manyonga told Reuters.

World championships gold and silver medalists Christian Taylor and Will Claye from the United States will attempt the men's triple jump world record of 18.29m set by Johnathan Edwards of Great Britain.

“We are both going up there to try to break the world record. It may have an asterisk beside it, but hey, I’ll take it,” said Claye. “After that we have some time to reboot and get ourselves back together, so Brussels will be big.”

The meet organizers have set apart three days for these world record attempts. If the weather conditions are not perfect Wednesday , the athletes might only compete on Thursday or Friday.

As for now it looks like the weather conditions tomorrow be as near perfect.