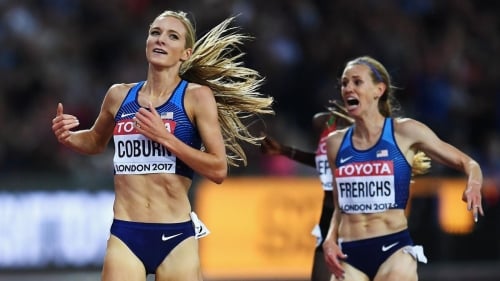 The United States runners produced a major shock by taking gold and silver in the women's 3000m steeple chase final at the World Championships on Friday night in British Capital city.

Emma Coburn and her teammate Courtney Frerichs impressed on day 8 at the World Athletics Championships by claiming gold and silver in an exciting women's 3,000 metres steeplechase final.

With less than 200m left there was a tight pack of five runners battling for the podium. But Coburn, the Rio Olympic games medalist, kicked away from the field over the last 80m to cross the line first in a new American record and Championships record time of 9:02.58.

"Oh my goodness, what a race to be part of," she said. "I have memories from 2015 and 2016 where I went too early for the last push, so I just had to keep trusting myself and be patient, and it looks like it paid off." Coburn said.

Meanwhile, Frerichs managed held off Kenya's Hyvin Yepkomei to claim silver in a new PB best of 9:03.77. The American runner shaved more than 16 seconds from her previous personal best time.

"I would never have believed this could happen. Maybe fifth or sixth, but silver? Wow, I am shocked. This is an absolute dream," Frerichs said.