• ISTAF presents a glittering array of stars including Lavillenie, Harting and Innovation for the Fans 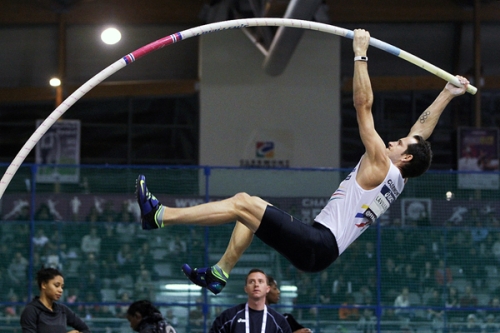 Two great stars of track and field have confirmed that they will be competing in this year's ISTAF on August 27 in Berlin's Olympic Stadium: Renaud Lavillenie of France, world record holder in the pole vault, and Berlin's very own Olympic discus champion Christoph Harting will be aiming for honours in the most prestigious German athletics meeting of the year. The ISTAF organisers will also be providing an innovative feature for the fans with a stage constructed above one of the bends as the athletes run underneath, creating the effect of going through a tunnel.

The ISTAF meeting, which this year has added to its main sponsors with the arrival of the tyre manufacturer Bridgestone, has been consistently the biggest spectator attraction of any athletics meeting in the world and 27,000 tickets have already been sold for this year's event, the 76th edition and an IAAF World Challenge Meeting.

Two weeks after the World Championships in London, some 180 elite athletes from around the world will be expected in Berlin's Olympic Stadium, including the world record holder in the pole vault, Renaud Lavillenie of France and Berlin's Olympic discus champion Christoph Harting. "The fans can expect thrilling competition in what should be 16 events in track and field," said the meeting director Martin Seeber.

The 30-year-old Lavillenie holds the current world record in the pole vault with 6.16m. The 2012 Olympic champion produced the highlight of the ISTAF INDOOR meeting in 2015 when he cleared 6.02m, a world best for the year. "Renaud Lavillenie is one of the best athletes in the world and has a special rapport with the fans," said Martin Seeber.

Christoph Harting won Olympic gold in the discus in sensational style last year in Rio, following in the footsteps of his brother Robert, who triumphed in London in 2012. Christoph will be aiming to win for the first time at the ISTAF meeting, although he already achieved that distinction at ISTAF INDOOR in February. Poland’s World Champion from 2015 Piotr Malachowski will be among his rivals while it remains to be seen whether his brother will be lining up against him. „It would be great if Robert would be in there as well. I look forward to these challenges,“ said Christoph Harting.

For the first time in seven years, spectators at ISTAF will be seeing a women's sprint relay including the high-flying German squad with Lisa Mayer, who sprang a surprise by winning the gold over 4 x 100m at the World Relays in Nassau in the Bahamas early in the year. "The women sprinters are part of the "New German Wave" in track and field. Their success gives a great reason to restore the sprint relay to the ISTAF programme," said Martin Seeber.

One year before the European Athletics Championships in Berlin's Olympic Stadium, ISTAF is ringing the changes with innovation for spectators: as the athletes set off on the first bend at the 400m start line, they will run through a tunnel, constructed with a tribune for fans above the famous blue track. It will be ten metres wide and 25 metres long, around four metres above the track, all done, as the ISTAF organisers say: "To bring athletes and fans closer together." Victory ceremonies are also planned to be staged on the tribune. The meeting director Martin Seeber explained: "We want to bring the stars of track and field right up close to the fans. We'd like to create an environment in our stadium where fans whatever their age can meet their idols, have autographs signed and take selfies with the Marathon Gate behind them." The top German sprinter Lisa Mayer thinks this innovation is a great idea: "A fan tribune and a tunnel - that's a really cool idea," said the 21-year-old.

More information about the ISTAF and tickets is available at: www.istaf.de
Live Stream