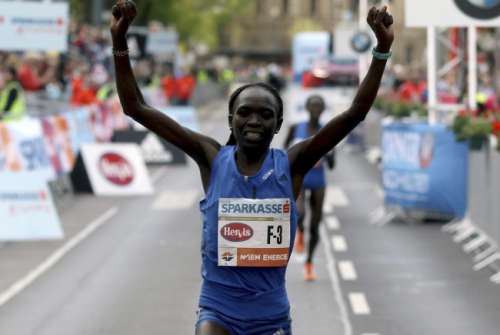 Third marathon, third personal best and a first victory: Nancy Kiprop had every reason to celebrate at the Vienna City Marathon. The Kenyan took the 34th edition of the Vienna City Marathon on Sunday and clocked the second fastest time ever in the events’ history. Nancy Kiprop improved to 2:24:20 despite the unfavourable weather conditions with some heavy wind. She missed the course record by just 33 seconds.

„Without the wind I think I could have run 2:22 today. However I do not bother too much about the time,“ said Nancy Kiprop. Victory was more important for the Kenyan. At the age of 37 she looks to secure the future of her family. A winner’s prize of 15,000 Euros comes in handy for Nancy Kiprop, who has seven children! She adopted five of them when she was younger and later had two with her husband. Her own children are now seven and 14 years old.

Nancy Kiprop took a break from running some years ago. Advised by Brother Colm O’Connell in Iten she studied and became a teacher. „It is my goal to open a school in Kenya one day. When I earn money from running it will help me to fulfil my plans,“ said Nancy Kiprop, who came back stronger after the break.

In 2013 she won the traditional New Year’s Eve race in Sao Paulo, then she took the Rio Half Marathon in 2015 with 72:37 before moving up to the marathon distance. Kiprop ran her debut in Valencia two years ago, taking second with 2:27:34. Last year she improved her half marathon time to 71:34 in Casablanca before finishing runner-up once more in Valencia. She clocked a personal best of 2:25:13 in that race, which she now improved again in Vienna. „Before my race in Vienna the victory in Sao Paulo was my biggest career win. But winning the Vienna City Marathon is now my biggest achievement,“ said Nancy Kiprop and added: „I plan to run for another three years.“

In contrast to the women’s winner the men’s champion Albert Korir is still very young with an age of 23. The Kenyan won the race in 2:08:40, running his first sub 2:10 time in what was his third international marathon. Korir had a PB of 2:10:08 before. „It is my goal to further improve my time in my next marathon, which might well be Berlin in September,“ said Korir, who trains with Vincent Kipruto near Kaptagat.

„We saw some great racing and we never had two such thrilling finishes. With the strong winds there was no chance for faster times,“ said Race Director Wolfgang Konrad, who was honoured by Austria’s Minister of Sports, Hans-Peter Doskozil. Konrad received the „Golden Honoury Award for merit for the Republic of Austria“ on Sunday at the finish line for developing Austria’s biggest one-day sporting event so successfully. A day earlier the organisers started a new project. Saturday’s 10 k race became an instant success. „We might well develop this into an international event as well,“ said Wolfgang Konrad.