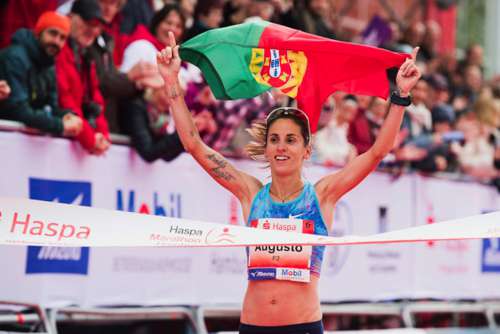 Tsegaye Mekonnen and Jessica Augusto grasped the top honours in the 32nd edition of the Haspa Marathon Hamburg on Sunday. In a tight men’s finish Ethiopia’s Mekonnen held off the Olympic Marathon Champion from 2012, Stephen Kiprotich of Uganda. Mekonnen clocked 2:07:26 while Kiprotich ran 2:07:31 in difficult weather conditions with wind, rain and even hail. Kenya’s Jacob Kendagor finished third in 2:08:50.

Portugal’s Jessica Augusto came from behind to win the Haspa Marathon Hamburg with 2:25:30. She was third for much of the race, but caught Ethiopia’s Ifa Megertu and Kenya’s debutant Viola Kibiwot at around 30 k before stamping her authority on the race. Megertu finished second in 2:29:47 while Kibiwot took third in 2:30:33. More than 16,000 runners entered the Haspa Marathon Hamburg.

Hamburg’s reputation for fields of solid quality leading to strong competition was set for its latest chapter as the elite and mass fields set off at 9 am local time: the 2012 Olympic champion Stephen Kiprotich was intent on victory and the course record to secure his Ugandan team place at this year’s World Championships in London, while Ethiopians Tsegaye Mekonnen and Tsegaye Kebede were keen to show they retained the winning touch. The women’s elite field reflected a broad range of international interest with Jessica Augusto talking pre-race of her ambition to break, one day, the Portuguese record of Rosa Mota: 2:23:29, set in 1985. 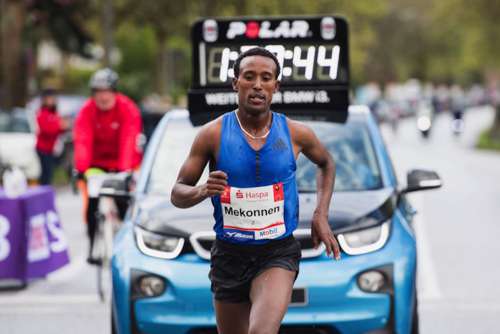 The city’s weather always has the potential for surprises and the early stages brought hail storms. Nonetheless, the men’s lead pace was consistent, going through 5 k in 15:02 and 10 k in 30:05. Stephen Kiprotich was towards the back of the lead pack, well aware that this tempo was right on course to break his own Ugandan record of 2:06:33. The pace was metronomic, ticking along to set up a tight finish. The expected big group leading through halfway – 1:03:21 – contained some less familiar names such as Kenya’s Gilbert Masai and Limenih Getachew of Ethiopia to the fore.

By 25 k Tsegaye Mekonnen had taken the lead with Masai 11 seconds back and Stephen Kiprotich 16 seconds adrift. They remained on course for a finishing time of around 2:06:30. Mekonnen, who made a stunning teenage debut in the marathon to win Dubai in 2:04:32 in 2014, was the man who had, at least in theory, the fastest gears.

Tsegaye Mekonnen’s tactics appeared to be going to plan as he led through 30 and 35 k, his lead over Stephen Kiprotich then 19 seconds with the Kenyan Robert Chemosin moving up to third, 34 seconds back. But Stephen Kiprotich is a master of competition when it is man against man, as his Olympic and World Marathon titles have proven.

At 40 k Mekonnen and Kiprotich were stride for stride, going through in 2:00:46. The Ethiopian found an extra gear to go clear around the final bend, winning by five seconds. It has been a long wait for Tsegaye Mekonnen to regain his winning form, over three years since that impressive debut which made him the fastest teenage marathoner ever.

Jessica Augusto was the fastest in the field going into race with her best of 2:24:25 and bags of marathon experience to match, having arrived at the classic distance via the traditional route of cross country and track success. In contrast, Kenya’s Viola Kibiwot was a debutant, having decided to move from track to road on the advice of compatriot and Olympic Marathon champion Eliud Kipchoge.

Portugal’s Augusto appeared to be upstaged as Kibiwot and Ethiopian Ifa Megertu led the early stages, going through 10 k in 34:06. By halfway, reached in 1:11:18, the duo were 37 seconds ahead of Augusto with Tanzania’s Magdalena Shauri a distant fourth.

But Jessica Augusto was chipping away at the lead. By 30 k it was all change, the Portuguese had drawn level and looking stronger than her rivals, Kibiwot and Megertu. Augusto reflected later that it was more a case of the leaders fading than her putting in a burst over the previous 5 k: “I held my pace steady and found that the leaders were coming back to me.”

While the national record of Rosa Mota was out of reach, victory was in sight for Jessica Augusto as she extended her lead. Consistency is her strong point, having run under 2:26 now on six occasions but this was her first marathon victory.

“When I saw the weather today, I decided it was not a day for concentrating on breaking the national record. It was tough because of the weather and I am delighted to be a marathon champion at last,” said Jessica Augusto. Ifa Megertu ran 2:29:47 for second place while Viola Kibiwot made a creditable debut with third in 2:30:33.

Experienced though men’s and women’s champions are in the marathon, Tsegaye Mekonnen and Jessica Augusto both agreed that running Hamburg was a first in more ways than one: they had never run a marathon which brought hail storms and sunshine together!

More information is available at: www.haspa-marathon-hamburg.de